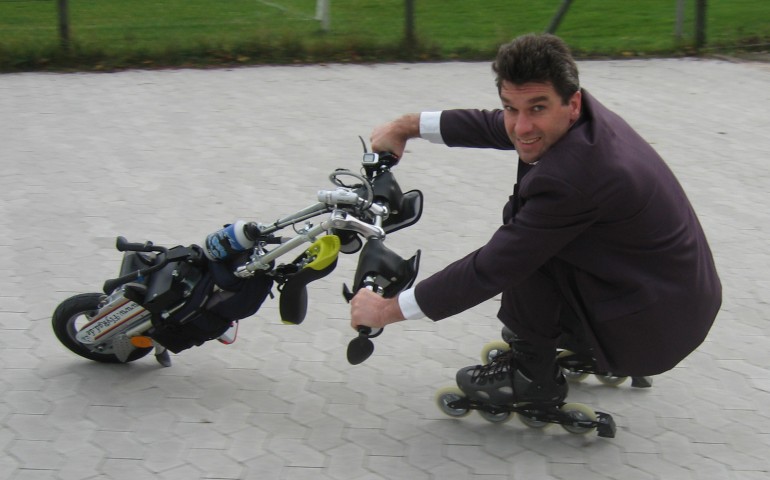 Got a pair of inline skates gathering dust in the attic?  Why not clean the blades up and pair them with the Flyrad, a motorized unicycle that facilitates all sorts of novel mobility positions.

Invented by a fellow named Thomas Rank, the mobility machine works unlike any traditional unicycle.  For one, there’s no self-balancing mechanism, so you can’t ride it without having accompanying reinforcement from your skating equipment.  The kinds of silly positions you can ride it in, though, does make for a good match when you dress up like a clown. 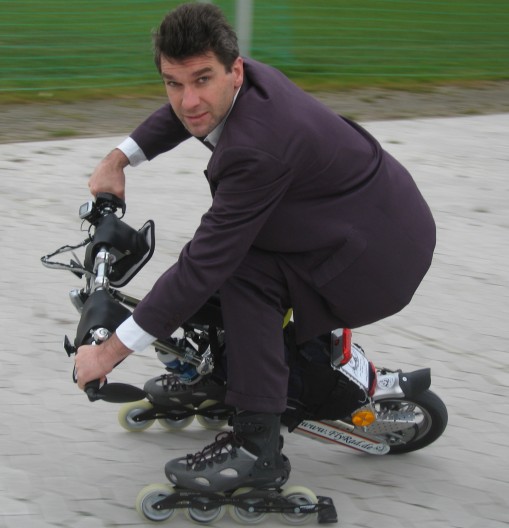 The Flyrad consists of a jackhammer-like structure with handlebars on top and a single wheel at the bottom.  It comes in three differently-sized models: one for adults, one for teens and one for children.  The adult version weighs 53 lbs and comes with a 500W motor, which powers it for a top speed of 25 mph.  A 36-volt battery juices the motor for a 31-mile range on a single four-hour charge.  There’s also an option to fit in a 1,000W motor and a bigger battery module.

As for the riding positions, you can stand upright and let it pull you, scooter-style.  You can also hang the handles low and let it tow you while squatting uncomfortably.  A saddle sits along the frame (accessible when tilting the unicycle forward), which you can mount like a bike, with the skates providing steering control.  There’s also the option of hands-free riding (since you can use the skates to turn) — simply push your leg towards the pads at the bottom of the handlebars and you’re good to go.

No pricing was announced, but the German-made Flyrad is slated to debut sometime next year.