Fold Flat Grill Compacts To Less Than An Inch Thick 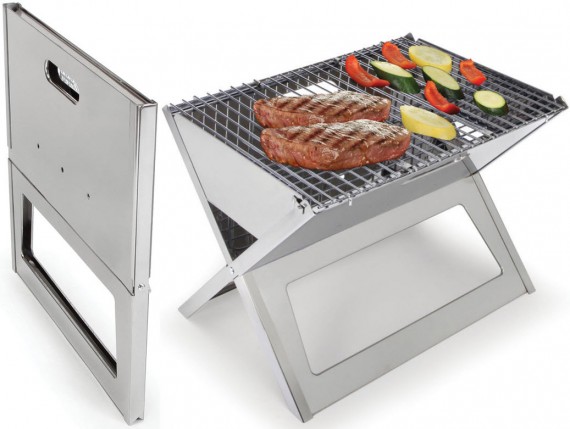 When folded, the Fold Flat Grill actually looks like an old-school steel folding chair.   You know, the kind that Stone Cold Steve Austin used to pull out from under the ring to hit The Rock on the head with.  I haven’t been following pro-wrestling for a while, but it would be cool if CM Punk pulls one of these folding grills out and breaks Cena’s head on it before starting a cookout right in the middle of the ring.

There’s no shortage of portable grills in the market.  In fact, we’ve featured plenty here, including the Carson Rotisserie, the BBQ Bucket Kit and the Fuego Element.  This one, though, looks sized for a real group meal, with enough space on the metal grid for six large slabs of juicy steaks.

As the name implies, the folding part is the real talent here. In fact, the Fold Flat Grill can squeeze into a pack that measures a mere 18 x 17.75 inches (h x w) and less than an inch thick.  That means, you can easily carry it by hand like a very slim briefcase or squeeze it into a tiny space in your vehicle during transit.

Folded out, the grill provides a cooking area that measures 17.5 x 13 inches (l x w), with the charcoal grate sitting 4.75 inches under it.  Features include stainless steel construction, a pair of triangle vents, three 0.25-inch vent holes on each side, and a v-shaped charcoal well for collecting ashes.

The Fold Flat Grill is available from Hammacher Schlemmer, priced at $79.95.