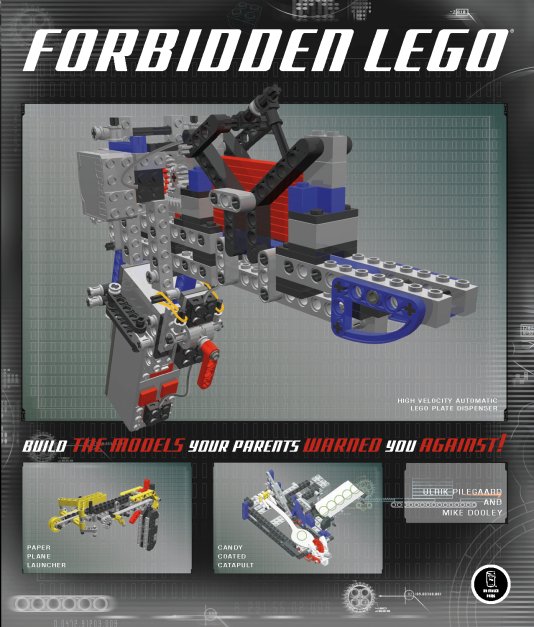 Most of us have certainly played with Lego at some point in our lives. As the company has long claimed, it may indeed be impossible to run out of model ideas that can be created with Lego bricks. Whole cities, cute farmhouses, pirate ships, even dragon and knight infested castles. Of course, you do have to follow as few very boring rules that were designated years ago by the suits at the Lego Corporation. Do not cut blocks, do not use non standard parts with any official Lego product, and do not even consider building anything that shoots projectiles of any kind.

Meet Forbidden Lego, a wonderfully cool paperback, lets you toss those dumb old rules right out of the window. This is the kind of building those fuddy duddy Lego people do in a dark back room when no ones looking. And the stuff your Mom warned you against. For instance, how about a fully automated food catapult, utilizing a plastic spoon and a couple of dozen strategically aligned official Lego blocks?  Or a gun that shoots Lego plates, and an almost completely useless but endlessly amusing (especially when used on others) continuous fire ping pong ball launcher? Sounds like fun, no?  The men behind this informational tome must have had a fairly twisted childhood, but the reader benefits from that fact. Or perhaps their jobs just drove them a little cuckoo, as they are both former Lego design team employees. My personal favorite is the rather nifty paper plane launcher. Guaranteed to spice up any boring business meeting (although chances are you may find yourself out of a job, the bright side being though that would free you up a lot more building time) and only took me an hour or so to build, a great improvement over the time it took me to construct SpongeBob’s pineapple house with my niece’s “conventional” Lego set. Lots of lovely full color diagrams and step by step instructions, that can actually be understood without a degree in advanced physics, should have even the most creatively useless souls building all kinds of deviant but delightful Lego models in no time. The ideas in Forbidden Lego are just a starting point though, once the mischievous littler Lego builder inside you is unleashed; doubtless you will have no problem coming up with more than a  few “forbidden” designs of your very own.

Following are videos of couple of forbidden lego projects in action.