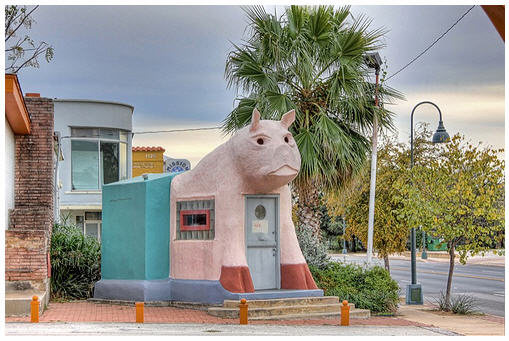 Originally a Pig Stand (one of those roadside restaurants housed on odd, pig-shaped buildings dating back to the 1920s), Frank’s Hog Stand in Texas was the location of one of the first restaurants in the world to offer drive-in service. Under new ownership in 2010, it’s gotten a makeover of sorts, keeping the cute pink piggy and comfy in-your-vehicle accommodation, all while directing their offering to a more specialized crowd: motorcycle enthusiasts.

They’re billing as the “World’s First Ride-In Restaurant,” which is a play on words at the fact that they’re looking to service motorists straddling a chopper between their legs in the parking lot, rather than those sitting inside a car. You can still get a bite to eat if you drive up on your Prius,  but you’ll have to make your way inside the dining space, all while praying that some big, burly biker doesn’t kick your ass for actually driving a Prius. 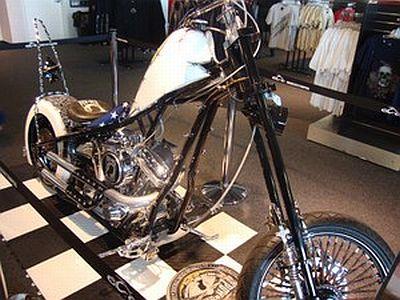 Frank’s Hog Stand serves classic American-style food (burgers, fries, shakes and all that) both inside the restaurant and on the lot. While the iconic pig remains on the building’s façade, the interior has been renovated with all new equipment and decor. The actual dining area has been fashioned to showcase motorcycle culture, complete with a custom chopper and a mural from artist Rob Wilkens that depicts a 60s-style biker scene.

While I’m deeply disappointed by the fact that a “ride-in” restaurant doesn’t allow you to ride your bike into the dining area (that will be the day), it still sounds like a nice place to stop by during an extended road trip with your motorcycle gang. Since you’ll be served on trays right outside the establishment, you need not worry about destroying restaurant property when you do beat up on the guy with the Prius too.  Just keep it in the lot and enjoy your afternoon.