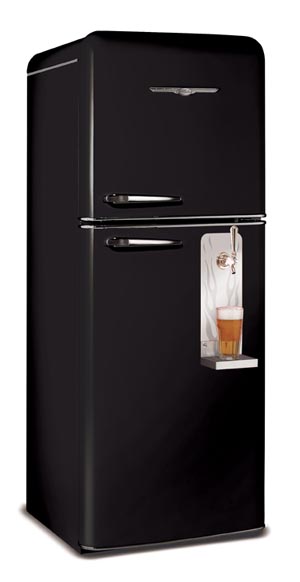 You like the idea of free-flowing draft beer in the kitchen, but don’t have the space for a standalone kegerator?  Trade in your current fridge for these 50s-style Northstar Brew Master Draft System refrigerators, which come fitted with a beer tap for quickly getting your cold beer jollies.

Sold by Elmira Stove Works, the fridges themselves are faithful reproductions of Northstar models from the 1950s with a full complement of modern features, including options for personal customization.  Three models are available (1950, 1951 and 1952), each of which can be ordered with a draft beer dispenser, allowing you to outfit your kitchen with a singe appliance that looks retro-funky, keeps food and drinks cool, and pours a seemingly-endless supply of beer.  Absolutely swanky.

All parts of the draft system are pre-installed in each fridge, so you can commission it to quench your thirst immediately upon arrival (provided you have your own keg waiting, of course).   When ordered with the Brew Master Draft System, the right shelves of each fridge will be removed to make space for a keg (both slim and standard varieties will fit).  The rest of the fridge remains usable for regular use, so you can stock regular beer bottles there, too (hey, you never know when the tap will run dry).

Prices for the Northstar refrigerators start at $2,195, with the Brew Master Draft System (including installation) adding another $800 to the total cost.   Sure, that ain’t cheap, but it’s hard to imagine a more glorious kitchen appliance to drop cash for than something this awesome.