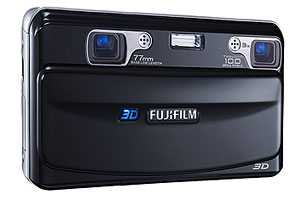 We’ve long been waiting for a real-deal 3D shooting camera, instead of the Viewmaster-style Lomo rigs we typically have to settle for.  That unrewarded anticipation may soon find compensation, though, when Fujifilm finally rolls out their FinePix Real 3D digicam, which the company says is on schedule for a September release.

The 3D-shooting, dual-lens compact camera doesn’t look anything special, which really doesn’t do its function justice.  Able to produce images that leap out without the need for clunky 3D glasses, it’s going to create a market all its own (just like Fujifilm did when it rolled out the first digital camera way back when).

Users can choose two ways to display shots taken with a FinePix Real 3D.  First is a special digital picture frame that can show actual 3D pictures right on the LCD screen.  The second is a print version, which involves adding a plastic lens to coat the photo and bring the image to life without the need for any extra gadget.

According to Fujifilm, the camera itself will cost around $600, the picture frame “several hundred” and the photos, for which they’ll launch an online printing service for, around $5 apiece.  The whole ensemble is going to be pretty expensive, but that’s the price for new tech, especially one as cool as 3D photographs.

While some folks are pretty unenthusiastic about the idea (relegating it to a potentially very niche market), I think it’s the coolest thing to happen to end-user photography in a while.  The real question is what 3D snapshots are you going  to hang on your wall?