Furby: All You Need To Know 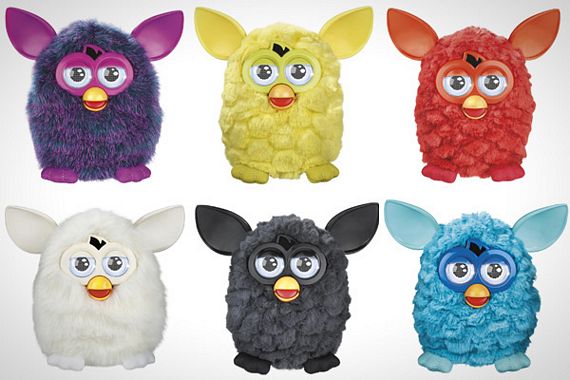 Few people old enough to remember the Gremlins giving them sleepless nights back in ’98 took too excitedly to the Furby. It was understandable — the similarity in the their level of creepiness was just too much to bear. Fourteen years later, the popular interactive plush doll is back, once again teetering the balance between cute and creepy while appealing squarely to today’s generation of kids.

Unlike the failed revival back in ’05, the newest incarnation of the toy borrows its aesthetics faithfully from the original doll. Hasbro says it’s slightly larger, although we doubt you’ll notice unless you put the two models side by side. The biggest difference physically are the eyes — instead of the glowing plastic whites in the original doll, the 2012 version sports two separate LCDs in its place. Yep, digital eyes, allowing them to be considerably more expressive with a selection of dot matrix pupils appearing depending on its mood. Since they’re proper LCDs, they didn’t bother stopping at different pupils either, using the eyes to display a variety of graphics (e.g. it displays hearts when it feels “loved”) to add even greater breadth to your interactions.

Most every physical element of the original is retained: the yellow beak that moves as it speaks, the wiggling ears, the eyelids for blinking, the plush feet, the pudgy tail, even the black marking on the forehead where the IR sensors once sat (it serves no real purpose now). By the time the holidays roll around, the Furby will be available in 10 colors, so you can assemble a veritable army, each one with a different fur than the next.

One of the big appeals of the original Furby is how it seemed like a living creature, reacting when you speak and interact with it (hence, the “A Mind of its Own” catchphrase). The same holds true for this iteration, with an internal mic picking up your speech, capacitive sensors (head, stomach) recognizing your touches, and a mechanical tilt switch so it knows whether you’re cradling it like a baby or holding it upside down. The more you talk to it, the chattier it gets, incorporating elements of your speech with its own as it learns new words.

Put a Furby next to another and they will interact. They won’t just carry on a conversation, they’ll also dance with each other if you put music on. Now, if we can only make them march like soldiers while chanting “Eat the humans,” it can make for the coolest army of creepy critters.

Furbies have always had a language of their own (“eee-tayyyyy nooo-looo” and a whole host of other speech sounds), which, I guess, is part of the appeal. I mean, if you can’t understand what the heck they’re saying, then you can imagine them talking about whatever you fancy. Furbies chatting about rainbows and puppies? Sure. How about getting into a heated discussion over which Bratz doll is the cutest? Definitely. Your army of furbies plotting about a world takeover? Excellent.

While the strange language is cute, those who’d rather understand what the tiny creatures are saying can use the free Furby iOS app. Yep, the toy doesn’t just get upgraded in its hardware — it comes with a software component, too. That means buying your kids a 2012 Furby effectively gives them another reason to ask you for an iPhone (probably not the best idea ever).

When fired up, the app will listen to anything the Furby says, then spit out its English equivalent (so you can actually understand what it’s blabbering on about). Aside from the translator, the app also comes with a built-in dictionary (Furbish to English) and a meals interface for feeding your Furby. Yep, the critter now eats (without the app, you can just stick your finger in its mouth and, yes, it will really bite — just kidding). And while it won’t die if it goes unfed, it’s going to get cranky without food. Really cranky.

The Furby runs on four AA batteries. We’re not sure how long a fresh set will last (depends on how much you play with it), but expect to stock a bunch, since there’s no OFF switch on this thing. And yes, that makes for tons of batteries consumed (until the kids get bored, of course) and one annoying Furby when it’s in a bad mood.

Designed for kids ages 6 and up, the Furby is now available from both online retailers and in stores.  Price starts from $60 each.