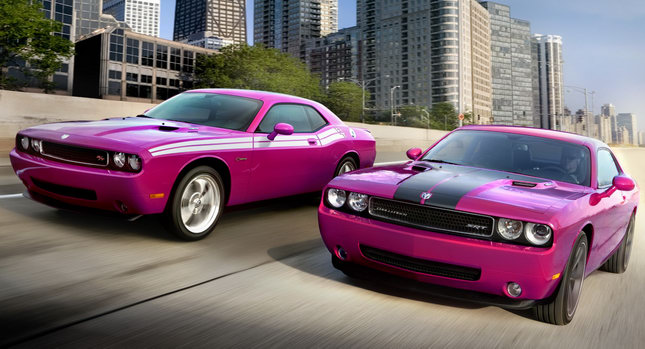 Well, that’s not necessarily true.  Some real men I know drive red, green, yellow, orange and white cars too.  Heck, John Wayne used to get by with a horse between his legs (literally, not figuratively) and a gun slung around his waist.  He’d kill you if you accused him of being anything but a real man too.

The Chrysler Group is hoping that muscle-driving macho men will embrace a pinkish hue for 2010 with their new line of Dodge Challengers, which will hit showrooms soon with a Furious Fuchsia finish.  Yes, a bright shade of purple for a speedster targeted at overcompensating middle-aged men male buyers.   Wee. 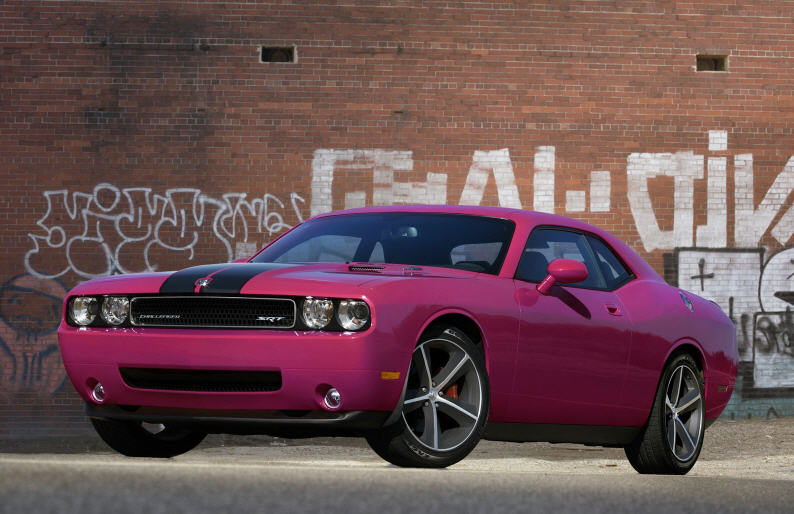 Two V8-powered models of the positively purple car will be available, a 425hp Furious Fuchsia SRT-8 Challenger and a 400hp R/T Classic version.  The former gets Satin Black eyeliner on  the wheels, a plaque on the dash, accent stripes on the leather seats and retro-inspired chromed quad exhaust tips.  The latter, on the other hand, gets 20-inch polished aluminum wheels, hood scoops, racing style fuel-filler doors and a Trak Pak clutch.

As feminine (okay, I went there) as Furious Fuchsia sounds, interested parties should be able to console themselves in the fact that at least  it sounds a little less like girly garb than Top Banana or Go Mango, two colors that Chrysler used for their automobiles back in the 1960s.   The photographs don’t even do the new color justice, according to company spokesman Dan Ried, who adds that “It’s tough to capture how it looks in the daylight.”  We presume he means it’s at least give it a chance before forming your opinion.

Chrysler describes the color as a modern update of the Panther Pink and Moulin Rouge, two similarly feminine hues that adorned several vehicles from  the automaker’s roster back in 1970. However it looks in person, you can find out for yourself at the upcoming Chicago Auto Show, where the Furious Fuchsia Dodge Challengers are slated to take the floor.