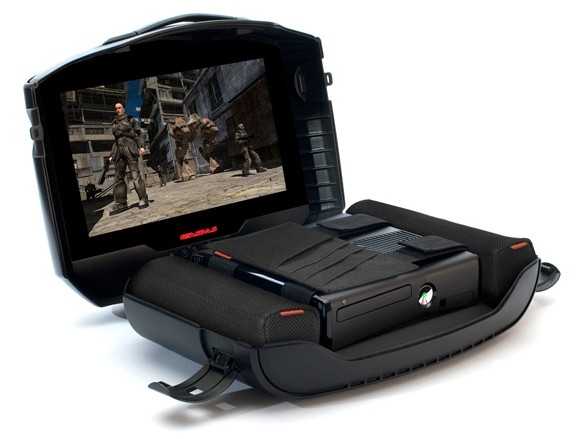 Many people probably relegated the GAEMS console carrying case to vaporware after the folks behind it went silent for a long time.  Turns out they were hard at work during the lull, finishing up the system and preparing for a mid-year release.

Designed to bring console gaming out of the living room, the rig lets you slip in an Xbox 360 (both original and slim) or a PS3 Slim into a portable briefcase-like container with its own LCD.  While the result is nowhere near as seamless as those “laptop Xbox” hacks we’ve been seeing, it does make on-the-road play possible without having to open up your favorite current-gen gaming machine.

Since it’s supposed to fit in a home gaming console, the GAEMS G155 isn’t small.    It is thicker than a regular briefcase, but is about as wide as a 17-inch laptop.  Made for portability, it features a carrying handle at the top, a hard polypropylene outer case, straps for securing the console and some thick inside padding for protection.

For the hassle of carrying something as beefy, however, you get a self-contained mobile gaming environment that has everything you need to take your favorite console FPS while having coffee at the local Starbucks.  It has a 15.5-inch LED HD screen, integrated stereo speakers, two 3.5mm jacks (for two player private listening),  built-in connectors and compartments for accessories (controllers, power supply).  You’ll have to leech off power from your favorite coffee shop, though (you need two wall outlets — one for the display/speakers and another for the console).

Oh yeah, the GAEMS G155 complies with TSA and airline regulations for carry-on luggage, too, so you never have to leave your city without a gaming console again.  Pre-orders are ongoing ($20 discount), with shipments slated for June 9.  Price is $299.99.