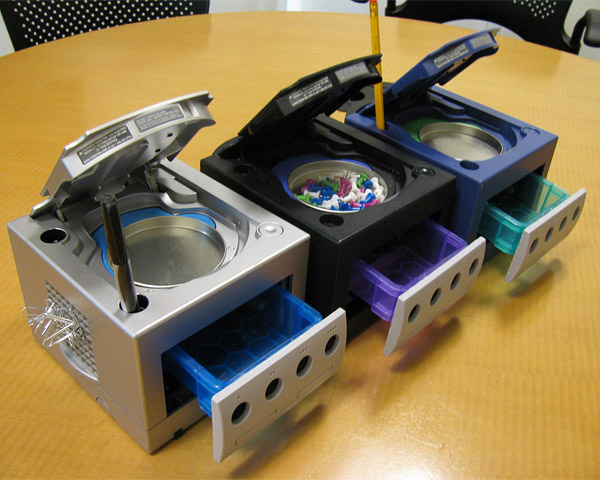 Let’s face it: if you still have a GameCube now, you aren’t playing with it.  While its contemporary, the PS2, continues to sell to this day, Nintendo’s cube-shaped system has been relegated to gather dust in the attic, sell at floor rates on eBay or get mangled into something else entirely.  The latter is what happened with these GameCube Desktop Organizers.

Created by Etsy seller GreenCub, these former gaming consoles have been “downcycled” into little storage containers for your office knick-knacks.  We think it’s quite appropriate, too, since — let’s face it — you’re never really going to play with a GameCube in 2011, are you?

The GameCube Desktop Organizers feature multiple compartments for storing  a variety of small supplies everyone eventually needs at some point in the office.   You know, stuff like pins, clips, pens, staples and emergency medicine for loose bowel (yep, I heard you especially need that last one).  It’s got a pull-out drawer on the front plate, a steel tray on the disc bay, pen holders on the Power and Reset buttons, a magnetized side vent for holding paper clips and a shelf below the rear handle for holding your mobile phone. All the internals, of course, have been scooped out.

Granted, this looks like something you can build at home if you’ve got old GameCubes and a little workshop skill.  Being that you’re lazy and clumsy and would rather spend your time on those new levels of Angry Birds, however, we’re thinking buying one pre-modded would be a better solution.

There are currently three pre-made colors available for the GameCube Desktop Organizer: purple, black and platinum.  You can order other color combinations, too.  Prices start at $39.