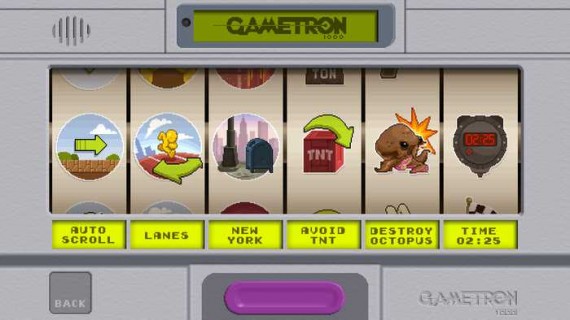 Crappy 99-cent mobile games are a dime a dozen.  And, I’m not entirely sure why, but we buy them.  And play them.  And it actually takes a while before we get so bummed by the crappiness that we decide to remove them.  What if you can just buy one game that will randomly generate all the crappy games your heart desires?  That may soon happen with the Gametron 1000.

A project being undertaken by Mojo Bones, it’s, basically, an app that creates new games on the fly.  We’re not actually sure how it’s going to work or if it’s even feasible, but wouldn’t that be awesome?  Instead of hitting the App Store or Google Play to dig for something fun and cheap, you can just open the app and get a new game.  If you like it, then keep it (you can save games and build your own library); if not, just delete and create a new one.

Gametron 1000 isn’t a functioning software yet.  Instead, the team behind Mojo Bones, which happens to be a legit studio (they have ranked games on the App Store), are raising funding on Kickstarter to develop the game.  Personally, I find the idea a little too wide in scope and, more likely than not, too ambitious to really work, although I do look forward to the finished product (do note, this is Kickstarter, where finished products don’t always happen).

The planned interface is, basically, like a slot machine reel, with each reel representing an element of the game, such as environment, character, genre and all that.  You press a button, the reels spin and whatever combination is on screen will then be put together into a game.  Since these will be software-generated games, don’t expect any real depth or sophistication.  Instead, expect simple arcade games (platformers, puzzles, side-scrollers) with 16-bit graphics, wonky physics and, more likely than not, a lot of questionable things happening in-game.  It’s like having your own bad game factory, which will probably be fun enough to make me buy a copy.