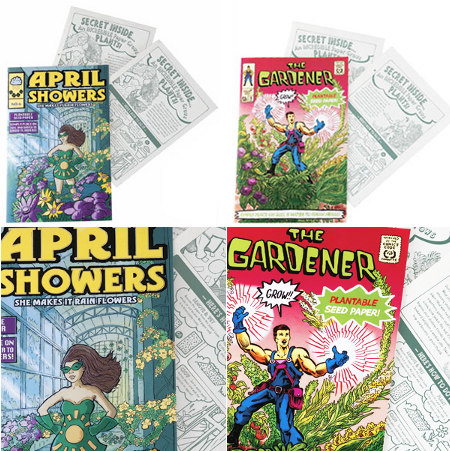 Granted, these two comics, April Showers and The Gardener, probably won’t be able to give Superman series any competition, but that’s only because the comic part is a gimmick.  Instead, they’re actually “plantable” paper infused with multiple seeds that you can bury under the soil to build yourself  a garden.

Neither of the two are intended for any involved reading, as evidenced by the fact that each one is only two pages long (by two, we mean it’s just one fold-out paper).  From what we can tell, April Showers looks like a Poison Ivy ripoff, while the Gardener seems like a mustached, overall-wearing version of Captain Planet.  As we said, the comic part is novelty, so don’t expect to have an enjoyable time with it (unless you like making fun of bad comics).

The Plantable Comic Books measure 10.15 x 6.5 inches and come packaged in a clear plastic sleeve, supposedly for “keeping it in mint condition”  (and, no, it doesn’t need to stay mint for planting).   A mixed variety of Wild Flower seeds are peppered throughout the pages of April Showers, while multiple herb seeds are baked into The Gardener’s paper.

Suffice to say, these novelty comics offer an interesting way to plant yourself a garden.  They’re available now, priced at $9.50 each.