Elevator Out Of Service? Just Use These Gecko-Like Hand Pads To Climb To The Office 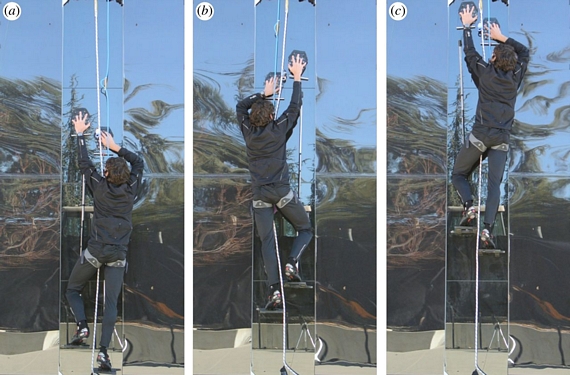 Over a decade ago, scientists discovered how geckos are actually able to plant their feet onto vertical surfaces.  Since then, there’s been no shortage of attempts to recreate that dry adhesive mechanism, which exploits van der Waals forces to adhere to anything that’s even remotely smooth.  A new hand pad created by Stanford University researchers just might prove to be the most promising of those attempts.

If you’re as unfamiliar to van der Waals force as I am, turns out, it’s an attractive force between two molecules that isn’t caused by either covalent or ionic bonding, which are the normal processes by which things adhere to other things. In the case of the gecko, their feet are covered with microscopic ridges that create van der Waals forces when they come in contact with various surfaces, allowing them to climb upright surfaces as easily as we walk on the ground.

Using the hand pad the Stanford team created, individuals can climb smooth vertical surfaces just like a tiny lizard without using vacuums or suction devices.  It only works on very smooth surfaces, like glass, but, man, it’s impressive, all the same.  The current design consists of individual hand pads, with a foot pivot integrated into them (so the person doesn’t have to pull his body up by his arms), putting the entire load of the person’s weight on the dry-adhesive pads.   Each pad, which is made from a silicone material called polydimethylsiloxane, comes with 24 small panels about the size of a postage stamp, arranged in slanted rows.  To use, you simply press the pad onto the surface, then pull down to trigger the adhesive effect; a person simply has to lift the pad at a specific angle to remove the adhesive force.

You can read the report from the link below.