Geek Pocket Watch: How To Look Like A Math Geek Without Really Trying 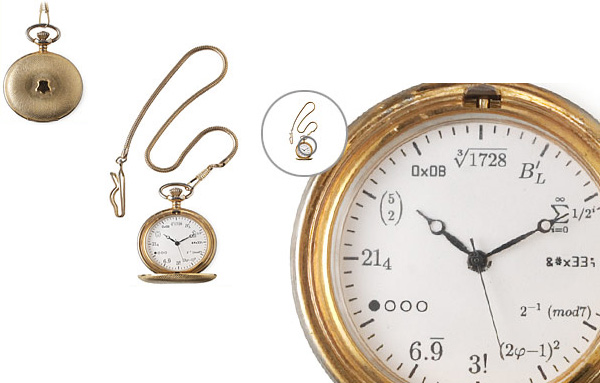 Want to confuse people who make the mistake of asking you for the time?  That should be easy with the Geek Pocket Watch, which replaces each number on the dial with a corresponding mathematical notation.

In truth, it works like a regular analog clock, requiring no feat of genius to read.  Watch people clam up in befuddled horror, though, as they look at those math symbols thinking they’re supposed to come up with the time in some unusual way.  Aaaaaaah!

The Geek Pocket Watch is a gold-plated, brass accessory with an 11.5-inch chain that’s designed for keeping in your pocket.  Why not a wristwatch?  Because pocket watches make you look like an academic (from the 1800s), doubling up on the intended effect of the novelty timepiece.

Half of the notations on the Geek Pocket Watch are alien to me.  And I’m a real geek (I used to eat live chickens in the circus, I swear).  So it’s not actually a “geek” watch as much as a “math geek” watch.  If you want to fool people into thinking you’re a math major (I have no idea why you’ll want to, for the love of God), it comes with a cheatsheet that details each of the notation.  Memorize them and impress the freshmen.