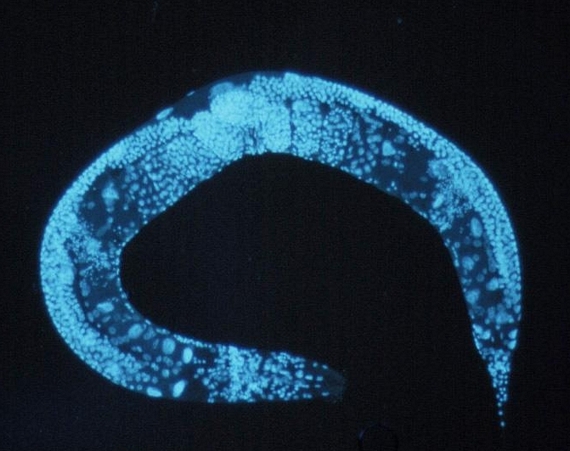 Imagine: eating all the Snickers, Reese’s, and M&Ms you want without ever gaining weight.  Heck, you can eat this entire Gummi Chandelier and you’ll still be fine. A new study suggests it’s possible.  The catch?  You need a genetic mutation to accomplish such a state.

A worm known as Caenorhabditis elegans was the subject of a series of experiments from a team led by Sean Curran of the USC Davis School of Gerontology and the Keck School of Medicine of USC.  In this study, the team managed to pin down the key gene that allowed some of the worms to maintain their lean form, despite being fed a diet that included incredibly high levels of sugar.

Worms with a hyperactive SKN-1 gene managed to keep themselves at the same weight despite the dietary change, while those that didn’t found themselves ballooning with the same diet.  What makes the study interesting is that this gene is also found in humans, where it’s known as Nrf2, opening the possibility that it may someday be controlled to better manage the way a person’s body reacts to food.

Nrf2 has long been studied in mammals.  Some pharmaceutical companies, in fact, have been developing small-molecule drugs designed to target it for the purpose of increasing the body’s natural production of antioxidants and  slow down the aging process.  Awesome, right?  Well, not exactly.  High activity in Nrf2 has also been linked to aggressive cancers, so it’s not exactly the simplest gene to mess around with.

The team is planning to test their findings on mice the next time around.