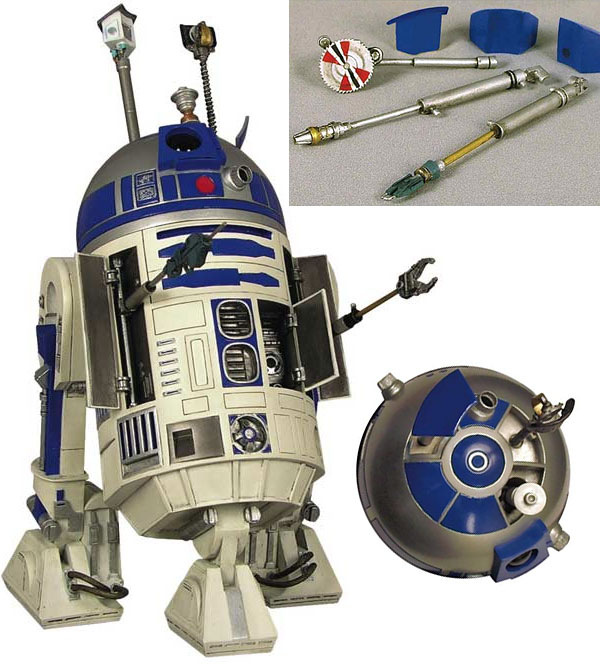 I’m not sure how functional its tools are, but Gentle Giant’s Star Wars R2-D2 Statue comes with eight of them.  That’s right, the beloved helper robot gets a 1:6 replica that can actually repair stuff (if a magical genie suddenly decides to breathe life into it, that is).

While carrying eight thingamajigs probably doesn’t cover Artoo’s versatile mechanical-fixing talents, it’s better than having an inanimate robot that just stands there doing nothing. Yeah, I’m talking about that R2D2 statue you have sitting on your shelf.  It sucks.

Gentle Giant’s version of the helpful, three-legged droid features an accurate polystone rendition of the popular robot, including precise physical details and a hand-painted body.  It comes with removable arms, along with exposed chest and dome panels where you can stick the bundled tools in.  Equipment you can put in the holes include a mechanical gripper, a periscope scanner and a utility saw, among others.  You can probably use the panels to hold real tools too, so you can bring the astromech droid along to carry your screwdrivers and hammers when you’re in a DIY mood.

A limited edition piece (each one will be numbered), it sounds like a great deal for only $149.   Do note that it won’t ship till June of 2010 (even if you pay now), which kind of sucks since I wanted one yesterday.  Yesterday, dammit!