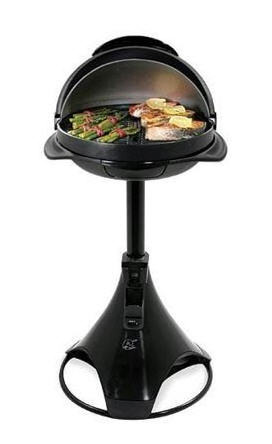 Want to listen to music while you’re scorching some burgers and steaks in the backyard?  The George Foreman GIPOD200 grill combines succulent barbecuing talents with an integrated iPod dock and speakers.  That means you can rock out to your favorite Michael Jackson ditty, all while preparing a family-sized meal.

Designed for both indoor and outdoor use, the GIPOD200 is an electric grill with a generous 200 square inches of nonstick-coated surface.  Like other George Foreman models, it drains fat into a large grease tray, which it strains, in this case, via a center channel that separates the cooking area into two parts.  Similar to the countless variants of George Foreman electric grills you’ve probably seen on infomercials, this particular model comes with adjustable temperature and an easy-to-clean surface.

What sets the rig apart, however, is the fact that it doubles as a sound system, allowing you to play tunes from an iPod (via the dock) or any other music player  (via an auxiliary connector).  It comes with an integrated amplifier and a 10-watt speaker unit for cranking out tunes.  Alternatively, you can plug in an extra output device (such as a headphone or an external speaker) via a 3.5mm audio jack.

If you’re wondering what relationship a music player has with a cooking grill, bother yourself no further – there is none.  With a full-featured iPod dock and speakers in tow, though, you can have instant blaring music wherever you place your George Foreman GIPOD200, saving you from having to set up a separate sound system for those backyard parties or in the kitchen.

At the least, it beats having to suffer through boredom while you stand around waiting for that steak to cook.  The George Foreman GIPOD200 Electric Grill (also known as the iGrill) is available now for $90.99.