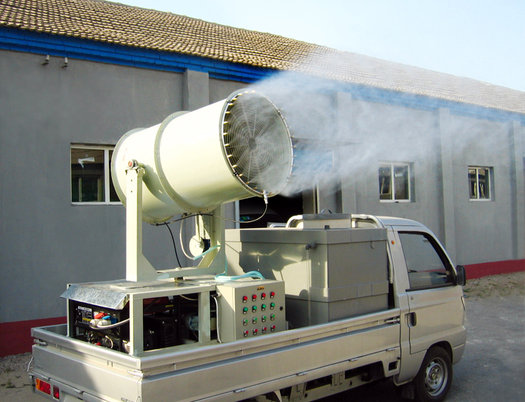 Look out superpowers. China has unveiled a new cannon. And it’s armed with massive doses of…errr…deodorant.

Don’t worry, humble citizen who doesn’t take baths. It’s not meant for you. Instead, Beijing will be using the Giant Deodorant Guns to spray gallons of fragrance over the city’s ever-growing landfills, so that nearby residents don’t have to put up with the aroma of freshly-rotting garbage whenever the wind blows their way.

That’s how serious Beijing’s garbage problem has become – a direct result of the citizens’ newfound purchasing power. With locals embracing the beloved Western throwaway culture of McDonald’s and Starbucks, rubbish has escalated to levels that current disposal systems just aren’t able to manage (7,000 tons more than what municipal disposal systems are calibrated to handle). According to reports, the city recycles a mere 4% of this trash, with the rest going to landfills that are quickly filling up.

While they work towards building new incinerators and disposal systems, the temporary relief from the intolerable aroma of decaying refuse has been left to the Giant Deodorant Guns, each of which can spray fragrances over a distance of 164 feet. Made by Chinese firms, based on German and Italian technology, the smell-neutralizing cannons have now been deployed at several installations across the city, with several more planned for current landfill sites.

On that note, I hereby recommend deodorant-blasting weapons be required equipment for all individuals with gas problems. Every time you huff one out inside a crowded elevator, pull the trigger and spare us all the suffering. Thank you.