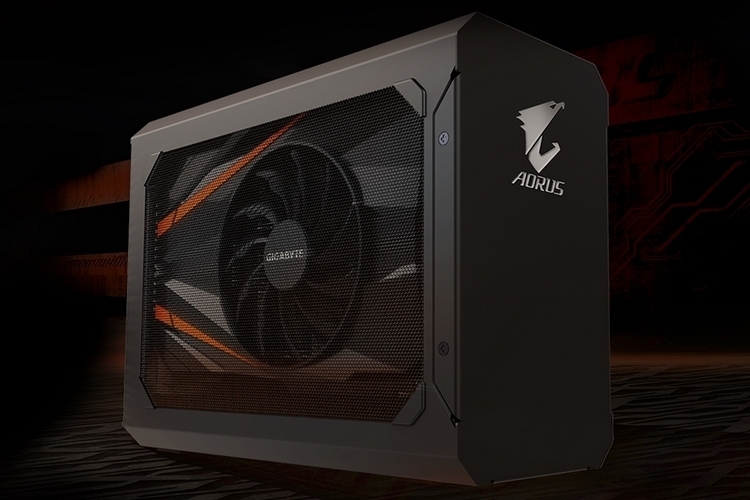 With Nvidia’s new Max Q GPUs, it’s fair to expect the next generation of gaming laptops to be barely thicker than most ultrabooks in the market. Simply put, you can now have a reasonably slim computer that can run AAA games at full force. Of course, doing so will require to purchase an entirely new laptop that’s on the expensive end of the price range – something not everyone is looking forward to doing. A more affordable solution for gamers? Just hook up your existing computer to the Gigabyte Aorus Gaming Box instead.

An external GPU case, the rig gives laptops and computers with underpowered GPUs access to a powerful gaming graphics card, so you can finally play Battlefield 1, The Witcher 3, and Outlast 2 without needing to make a complete system upgrade. It should handle any VR content with veritable ease, too, so throwing this into your existing workstation can turn an erstwhile productivity-focused setup into a capable gaming system. 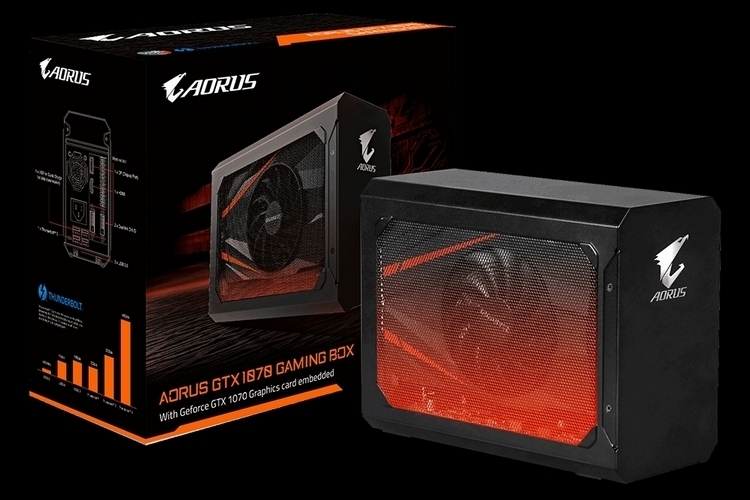 The Gigabyte Aorus Gaming Box houses an embedded 8GB GEForce GTX 1070 GPU inside, which should put enough power in your arsenal to run every modern game imaginable at peak (okay, maybe near-peak) settings. It hooks up to your laptops and desktops via a Thunderbolt 3 connection, so as long as your machine has one of those available, you should be able to set up and play in a jiffy. That means, most ultrabook users should be covered, along with MacBook Pro diehards, so that’s a whole lot of folks that can turn their erstwhile productivity machines into absolute productivity killers. Yeah, good luck getting anything done once you realize you can now play any video game you want. 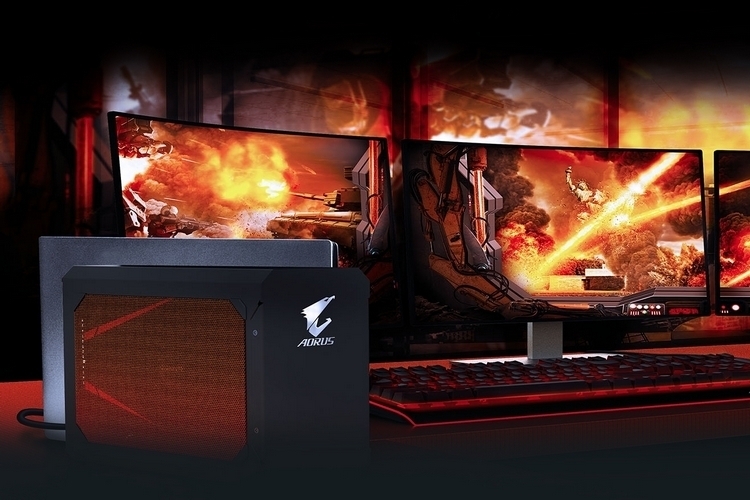 For hooking up to low-latency gaming displays, the box comes with one HDMI slot, one DisplayPort, and two DVI-D connectors, so you can connect up to four separate monitors for multi-screen gameplay. From what we can tell, it won’t be possible to use your laptop’s display for the GPU-processed output, so a separate monitor or TV is a must-have requirement. For hooking up peripherals, the box comes with three USB 3.0 slots, allowing you to use it as a central hub for gaming accessories, with a fourth USB port serving as a high-speed charging slot, courtesy of its Quick Charge and Power Delivery support. 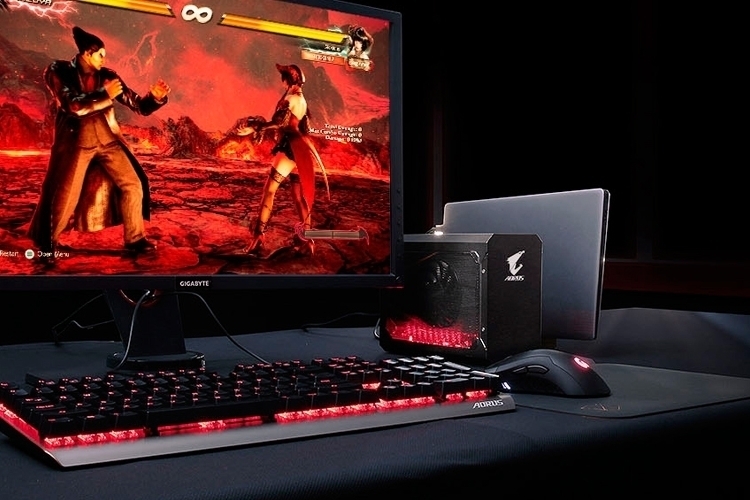 The Gigabyte Aorus Gaming Box, by the way, handles the cooling for the GPU on its own (it has its own oversized fan), so you need not worry about making your own arrangements to minimize overheating. It’s pretty compact, too, at 8.3 x 3.8 x 6.4 inches (depth x width x height), allowing you to throw it in your luggage, so you can play games even while living out of hotels during business trips. Oh yeah, this requires a wired power connection the entire time it’s used, so gaming on the go isn’t likely to be a very convenient affair.

Slated for availability in the second half of the year, the Gigabyte Aorus Gaming Box is priced at $599.99.

Let’s take a closer look at the different features of this Gaming box and try to understand how it all works.

The Casing and Size – The casing for this gaming box is quite elegant and compact in size. The product measures in at 212 x 96 x 162mm and weighs in at around 5.20 lbs or 2360 grams. The RGB fusion 16.8M Customizable Color Lighting makes it stand out. The overall design of the casing is quite simplistic, the front end is dominated by the Aorus logo and the rear end contains ports for connectivity. There are large vents on both sides of the casing for the cooling of the GPU. The small size and inclusion of a carrying bag make it quite easy to take the gaming experience with you wherever you go.

Connectivity – This gaming box comes with a plethora of I/O ports that make using this gaming box a breeze. The main item here that allows this high-end gaming box to connect to your notebook is thunderbolt 3. The Thunderbolt 3 here offers blazing fast connection speeds of up to 40 Gbps and is also able to deliver up to 100W of charge to your laptop. At the rear end of the AORUS GTX 1070 Gaming Box you can find a single HDMI port, 1 display port and 2 DL DVI-D ports that can be used for connection with external monitors. Here, you can also find three USB 3.0 ports for connectivity with devices such as keyboards, mice, LAN adapters etc. Right next to these three ports, you can also find the Quick Charge 3.0 USB port that can charge your modern smartphones at a rapid pace.

Device Setup – The setup process for the AORUS GTX 1070 Gaming Box is simple and straightforward. The process just requires you to connect the thunderbolt cable to the connector on your laptop. Once you connect the cable to your laptop, the thunderbolt 3 driver utility will set up the gaming box and install the NVidia GeForce graphics driver on your laptop as well. Within a matter of minutes, you will be good to go. When you start up a game, the Gaming box automatically switches the GPU from internal GPU to the external GTX 1070 present inside the Aorus Gaming Box. Through the Thunderbolt 3 port, it essentially passes the display back to your Laptop’s display. You are not required to adjust any settings manually as the gaming box takes care of everything. The device is plug and play, you are not required to switch it on or anything, it will automatically kick in when required. The removal process is also quite simple, as you plug out the thunderbolt cable, your notebook will automatically switch back to using the integrated GPU for all tasks.

Performance of the Gaming Box – Thanks to the included GIGABYTE Geforce GTX 1070 mini ITX OC GPU, the gaming box can turn any laptop into a killer gaming machine. The device can handle almost anything that you throw at it with great ease. The GTX 1070, in this case, comes with 8Gigs of GDDR5 memory clocked in at 8008MHz. The GPU itself is clocked at anywhere ranging from a base clock speed of 1531MHz in normal gaming to a 1746MHz clock speed while running in OC mode with Boost. The GPU is capable of handling display resolutions of up to 7680×4320 with great ease and can drive up to four displays. All these features allow it to run all games of the current generation with high levels of details at high resolutions and frame rates. Another added bonus is the support for VR, most integrated GPUs for laptops are not capable of handling VR, and this gaming box allows laptop owners to experience the latest and greatest forms of technologies. The integrated GPU has a hard time keeping up with games such the Witcher 3, Battlefield 1 and the prey, this external GPU allows your system to play all these games at fluid frame rates and high resolutions.

Noise Levels and Thermals – Despite the small size of the Gaming Box, the GPU does not heat up much even under heavy loads. This is all thanks to the presence of large cooling vents present at both sides of the Gaming Box. There is an ample amount of airflow and thanks to that, the GPU sits comfortably at around 70 even during gaming. This also results in low noise levels as the cooling fans kick in at full speeds only when required. Both the thermals and noise levels of the gaming box are quite reasonable. Another added bonus of being using an External GPU is that your Laptop will not heat up much during gaming as most of the heavy lifting is taken care of by the AORUS GTX 1070 Gaming Box.

Are thunderbolt based Gaming boxes like this worth it?

The introduction of Thunderbolt 3 in laptops is nothing less than a revolution. This small port allows you to do quite a lot of cool stuff. For starters, you can connect GPU boxes such as this that allow you to use high-end GPUs made for PC gaming on your laptops. The port has a 40GBps speed that allows you to connect even the most power hungry GPUs to your notebooks. The port also allows you to supply power to your system.

For gamers who are looking to play games on their existing ultra-portables or those who move a lot, this GTX 1070 gaming box from Aorus is a blessing. The small footprint allows you to take the gaming experience anywhere with you. The plug and play connectivity make using it a breeze. It comes with more power than you can ask for. It is capable of running any game that is currently available on the market at fluid frame rates.This gaming box has so much to like about it, the build quality is supreme, the setup is simple, the performance is excellent, the temperatures are quite stable and the device does not make a lot of noise as well during operation. All these features combined with a competitive price tag make it a very interesting option for anyone who is looking for an external GPU box for his existing laptop.