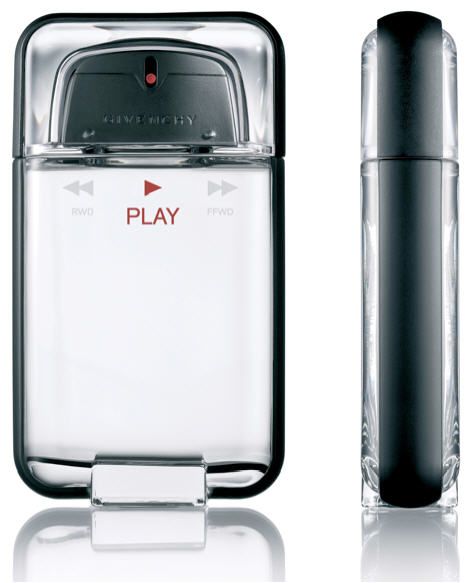 Smelling like Justin Timberlake only really makes sense when you’ll be locked up in a dark room with Jessica Biel.  In case you still like the idea, though, you can now do it with Givenchy’s latest fragrance.  Called Play, it comes in a perfume bottle that masks itself as a music player.

It’s easy to be tricked into thinking that the perfume’s housing is actually a PMP.  With a rubberized edge and touch-like playback buttons, what else could it be, right?  Instead of delivering music as soon as you press “play,” though, the bottle will instead spray its contents throughout your body.  Congratulations, you now smell like a pop star.

According to the convoluted press statement, Play is influenced by “mobile multimedia gadgets, those quintessential objects of modernity and style that have become both everyday objects and icons of our era.”  In less obtuse terms, that actually means, “This fragrance smells like shit, so we’re adding the unusual form factor to make it accessible to younger dudes.”

Britney Spears, Cameron Diaz and Jessica Biel all submitted to JT’s charms.  Who knows, using his perfume might lend you with the same sex appeal.  Probably not, but you’re always free to dream, right?

At the least, Play gives you a fake reason to always carry a bottle of perfume around, without having to look like some pansy metrosexual – “Me, carry perfume?  Please…that’s my music player.”  Riiiiiiight.