This Spray-On Bandage Will Emit Light To Signal Healing 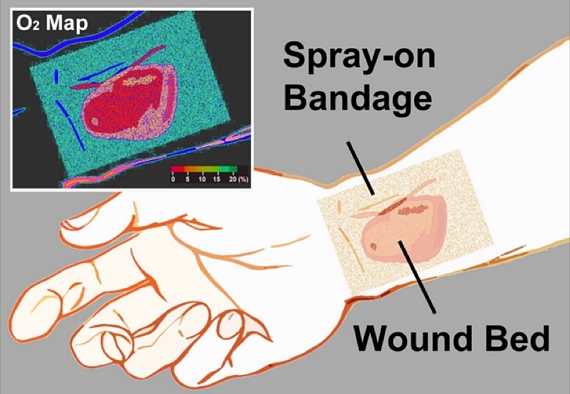 Putting a Bacon Band-Aid or some other bandage on an open wound is a great way to keep it covered up from potential agents of infection.  But it’s no help when trying to ascertain how well the wound is actually healing.  A new type of spray-on bandage, however, comes with a built-in feature that can give people some clues.

Developed by Professor Conor Evans of Harvard Medical School, the bandage can measure the level of tissue oxygenation in the wound, then emit a corresponding light to signify it.  To see the light, simply use a camera or a smartphone with a flash to take a photo of the wound.   The resulting picture will include a green-red heatmap image that shows the current level of tissue oxygenation.

Described as a “smart” bandage, it features two components: a bright sensor molecule and a bandage material that seals the wound.  The bandage glow is generated using phosphors, which can absorb light from the camera flash and emit it back using a process called phosphorescence, illuminating brighter and longer the lower the concentration of oxygen in the area.

To apply the bandage, it is sprayed onto the skin using viscous liquid, which dries into a solid thin film in about a minute.  Upon drying, a second transparent barrier layer is applied on top to seal the film in and minimize the rate of oxygen exchange between the bandage and the room air, leaving it more sensitive to the oxygen within the covered tissue.

You can learn more from the complete report published at Biomedical Optics Express.