Turning exercise into an entertaining game has been a fascination for many gadget and software manufacturers. Which is why we’ve had tons of products in the space, from gaming treadmills to Wii peripherals to Kinect’s sports motion games. The Goji Play is one of the more interesting implementations we’ve seen of late, turning any erstwhile boring cardio equipment into an interactive game machine.

Does this thing need to exist? Honestly, I think so. Unless you’re doing intervals or some other high-intensity program (and unless you’re a serious gym-rat, you’re probably not), doing cardio on gym machines is one of the downright most boring things you can imagine. That’s why they put big-ass TVs wherever treadmills and ellipticals are situated, after all. Having this contraption lets you turn an erstwhile regular exercise machine into a functional game platform, allowing you to play games that integrate the exercise movement as part of the control set. 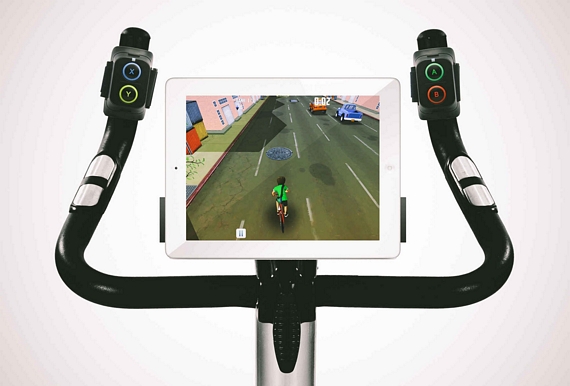 Developed by the same guys behind Guitar Hero, the Goji Play consists of a wireless clip-on activity sensor and a pair of wireless controllers sized to fit into the handle of most standard cardio machines, including treadmills, ellipticals, and spin bikes. You can also hold them in hand, if you prefer running without grabbing onto anything. The sensor and controllers will pair wirelessly with an iOS device, so you’ll need to find a way to prop one up on the exercise equipment, too (we’ve seen a lot of gyms install mounts now because people use their phones and tablets a lot while exercising). Once that’s done, all you have to do is choose a game to play (currently, they have around a dozen or so titles available) and get to work.

Basically, the activity sensor will monitor your movement and integrate that into your character’s movement in the game (e.g. in Fisticuffs, the strength of your player’s punches are determined by how hard you’re running or biking), with the controllers taking care of the other actions. Games currently offered look really fun, with a decent variety that includes racing (Super Moto X), boxing (Fisticuffs), and puzzles (Smash the Blocks), among others.