Goldcaster, A Guitar Lathered In Gold 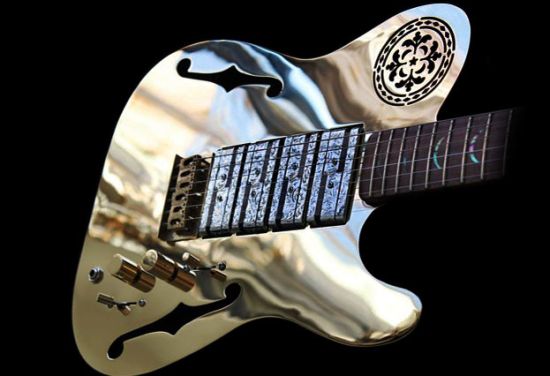 You may never be the world’s greatest guitarist, but you can lay claim to being the most ridiculously ostentatious ever.  How?  By waxing your fretboard finger massage on this: the Goldcaster, a  gold-covered, hollow-body six-stringer.

Built by Jhoseph King, the custom-made instrument is being pegged as the world’s first and only gold guitar.  Which isn’t exact, since it’s not entirely gold, despite the fact that there’s probably more shiny yellow metal there than the teeth of all rappers combined.

The Goldcaster’s most prominent feature lies in its hollow body, which is topped with an 18k solid gold surface, complete with decorative carvings.  Aside from that, 33 other parts get the gilded treatment, including the knobs, nut, bridge, neck plate, strap buttons, headstock logo and headstock lettering.  The rest of the components appear to have used more conventional materials, most likely in an effort to retain a listenable sound.

How does it play?  We have no idea.  We know one thing it’s good for, though: the next time you do a Honky Tonk Man guitar smash on someone’s head, simply use the top part.  Sure, you might break some strings, but that hard metal should knock someone out while keeping your axe fairly intact.

Personally, I don’t think the Goldcaster looks anywhere near as luxurious as the $1 million asking price.  For seven figures, I want a weaponized guitar that shoots lasers and can set itself on fire when I pull the sissy bar.  But with all that gold and being one-of-a-kind, I guess it really can’t be cheap, right?