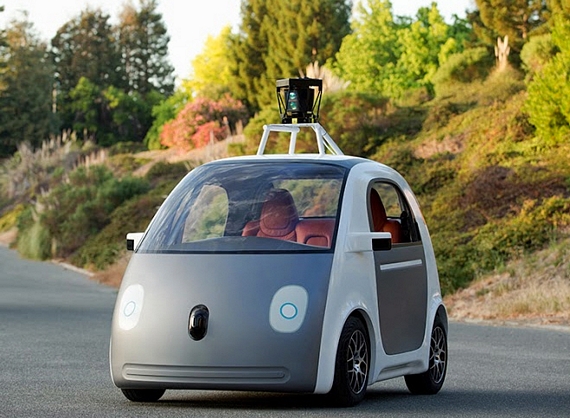 For years, Google has retrofitted existing cars with their self-driving system to test viability of the technology on the road. This time, they’re taking the next step: putting together a self-driving vehicle from scratch.

Unveiled at Re/code by Sergey Brin, the self-driving car prototype is purpose-built for ferrying passengers autonomously. As such, they took out all the parts that people use when they drive, churning out a car that has no steering wheel, pedals, mirrors, gauges, and other vehicle staples.  That means, no chance of manual control whatsoever, putting your life completely at the robot car’s mercy.

The car comes with a compact and rounded appearance that’s a bit cartoonish, almost like the kind of future cars you can imagine seeing in a goofy children’s show (if it’s raining, make sure to get out of the car carrying a Rainshader Umbrella — perfect fit). Safety features include blind spot sensors that can detect objects up to distances equivalent to two football fields in all directions, electronically-limited speed (the current version maxes out at 25mph), and backup automated systems that will take over the brakes and steering in case the default setup malfunctions (though we’re not sure how this part works).  Inside, it comes with seats to hold two people, a cargo area for belongings, a screen that shows the route, and start/stop buttons.

According to Google, they’re planning to build 100 early versions of the prototype for testing during the summer. The company itself has no plans of selling their own cars, though — instead, they’re likely going to license the technology to existing automakers for use with their own vehicles.