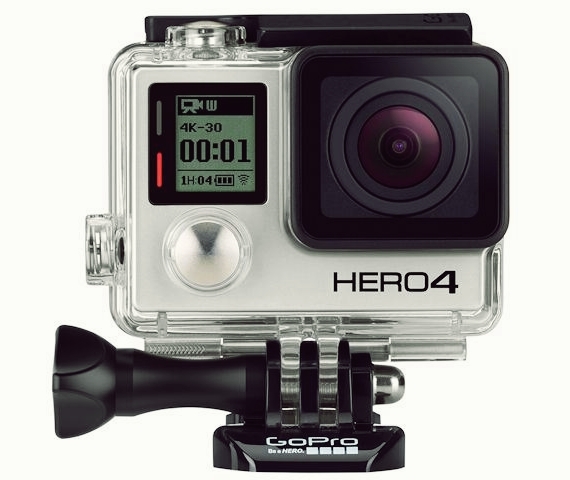 Daredevils, adrenaline junkies, and drone pilots, rejoice! The new GoPros are here.  And the star of the show, the GoPro Hero4 Black, boasts some serious features upgrade from its best-selling action cam predecessor.

Fans of 4K video, double rejoice!  The new flagship camera doubles the frame rate of the outgoing model’s ultra-HD video captures, allowing you to record up to 30 fps, making it a compelling option for professional-quality 4K recordings, with 2.7K video maxing out a 50 fps and 1080p at 120 fps.  More impressively, it does that while retaining the same battery life of its predecessor, so you can enjoy smoother high-res videos without sapping your ever-precious stash of juice.

The GoPro Hero4 Black comes with both Bluetooth and WiFi, giving you double the options in connectivity, with a processor that runs at twice the speed of the previous flagship model.  Oddly enough, the Black doesn’t get a touchscreen display – a feature they actually put on the cheaper Hero4 Silver model.  Yes, we don’t get it, either.  We’re guessing a touchscreen plus 4K at 30 fps sapped the battery or taxed the processor too much, but we don’t really know for sure.  All we know is, it’s kind of a bummer.

One big change is the battery design, which now slips in via an easy-to-open spring-loaded trap door.  The catch?  It uses an entirely different battery from previous models, so if you’ve built up a healthy collection of spares, you’re going to have to get rid of that the same time you sell the old GoPro, in case you’re planning to upgrade.  Other changes include a new context-sensitive menu, an improved ProTune feature, and new modes for low-light stills and time lapses.