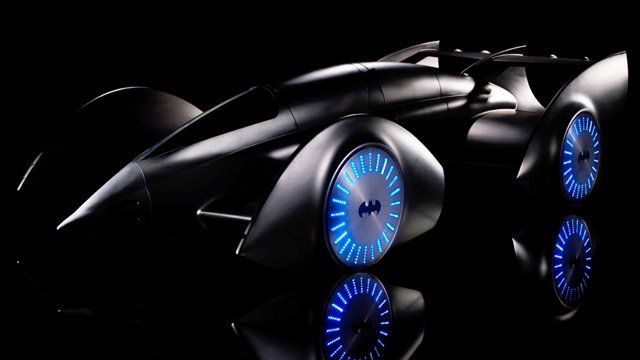 We have no idea if Batman Live will end up awesome or cheesy.  It’s always a toss-up with these stage shows.  At least, we now know what the Batmobile they’re using will look like.

Fashioned by acclaimed F1 designer Gordon Murray, the superhero vehicle naturally borrows some cues from the official ride used in recent Batman films.  Rather than making it even wilder and crazier, though, they decided to tone the design down a lot, approaching the vehicle’s lines and curves from a more realistic perspective (read: it’s not as awesome as Batman cars in the movies).

All the cool billionaires are shunning petrol rides and Bruce Wayne is no different.  Instead of some supercharged gas guzzler, the new Batmobile houses a hydrogen fuel cell powertrain, although that nasty carbon-ceramic afterburner puts some damp on the new ride’s environmentally-conscious posturing.

Details of the vehicle include a carbon fiber trim, front-mounted lasers, sonar and, of course, the requisite scores of LED lights.  Since the car is a prop for a stage show, they didn’t bother putting in real wheels.  Instead, it’s supposed to have virtual ones since the vehicle will hover 40mm off the ground when driven (so, it’s actually a Hoverbatmobile).

You can see the new Batmobile during the presentation at the video link below.  If you’re interested in seeing it live, you should check the Batman Live schedules in your area (Europe only, for now).  The show premieres July 20 in Manchester.