It doesn’t matter how old you are, where you live, or how big of a Christmas shopping budget you have for this coming holidays.  Chances are, there is someone in your life who spends a good part of their hours daydreaming about the realm of the Seven Kingdoms, holding out hope for the future of the Stark siblings, and praying every night for George RR Martin’s health, so the dude might actually get to finish the epic that is A Game of Thrones on Wordstar in his DOS computer.

If you’re getting these folks a gift for Christmas, might as well be something that further fuels their ongoing love affair with the exciting adventures in the continent of Westeros. 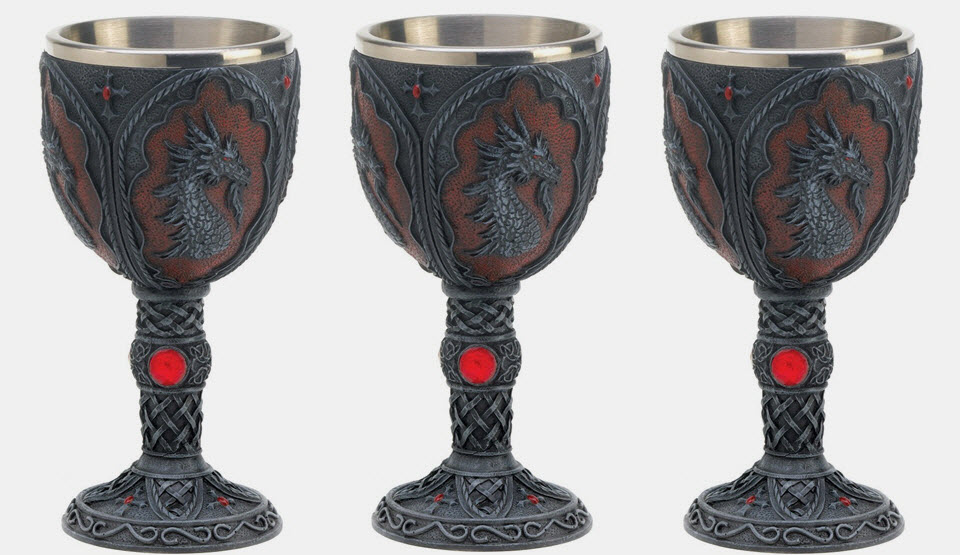 What better way to enjoy a marathon viewing of the show than with a good bottle of wine that you can enjoy from a goblet that looks like it came straight out of the Red Keep?  It features intricate scrollwork, fake gems, and detailed dragon’s head crests that really spiff up the medieval fantasy aesthetic.  Despite the resin construction, it’s very substantial, weighing in at 1.3 pounds, and durable, so expect it to stand up to the most rigorous manners of use (and, by rigorous, we mean, a serious consumption of wine over many weeks and months).  The inner stainless steel drinking cup is removable, so you can wash that on its own to avoid damaging the elaborately-decorated chalice. 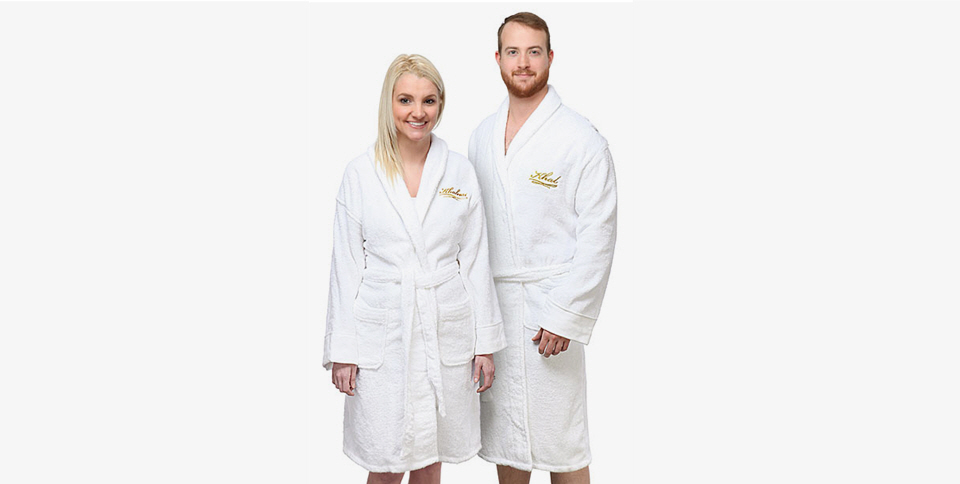 Only in Westeros can the union between a young, exiled woman who bathes in boiling water and the man who leads a group of vicious, violent nomads be the most romantic love story in all the land.  Sure, Drogo’s dead and all, but nearly every other coupling that came after them on that darn show just seems either barbaric or gross.  Or both.  Anyway, if you’re in search of a gift for a lovestruck pair of HBO Go subscribers, this his and hers cotton terrycloth bathrobes, which come stitched with the pair’s respective names in gold thread, should do the trick. 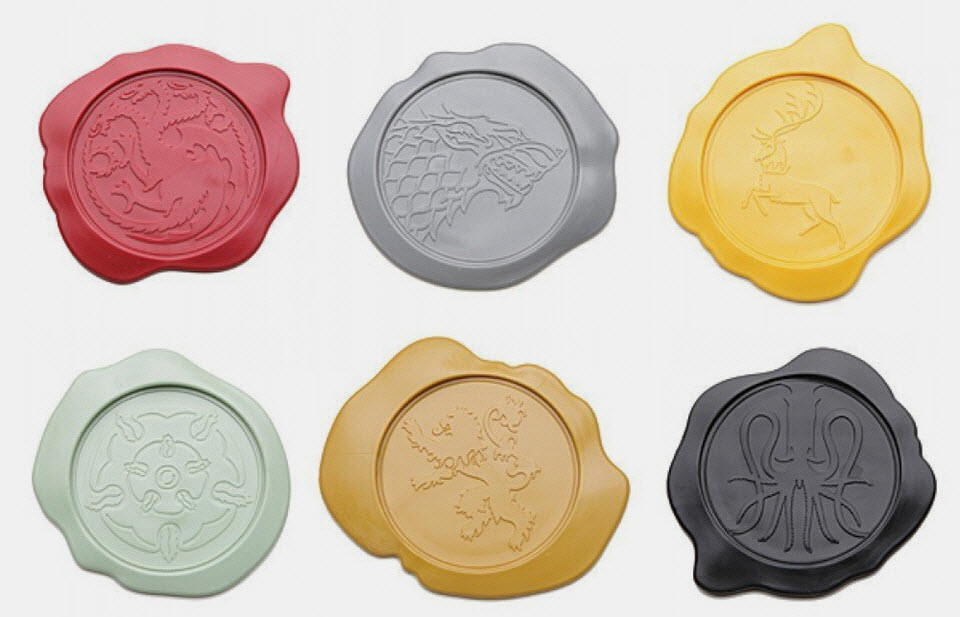 There’s no shortage of Game of Thrones coasters designed to hold drinks for diehards who like to surround themselves with keepsakes from Westeros, but these Wax Seal Coasters from the HBO Shop just might be the nicest we’ve ever seen.  Created from a flexible, rubbery material, the coasters are designed to look like real sealing wax that came straight out of a royal letter delivered to an important Lord somewhere in the kingdom of Westeros.  It comes in a set of six, each with a sigil from the House Targaryen, House Stark, House Baratheon, House Tyrell, House Lannister, and House Greyjoy, respectively.  It’s only designed to hold drinking vessels up to 3.25 inches in diameter, though, so the set is strictly for smaller glasses and cups, rather than larger steins and mugs. 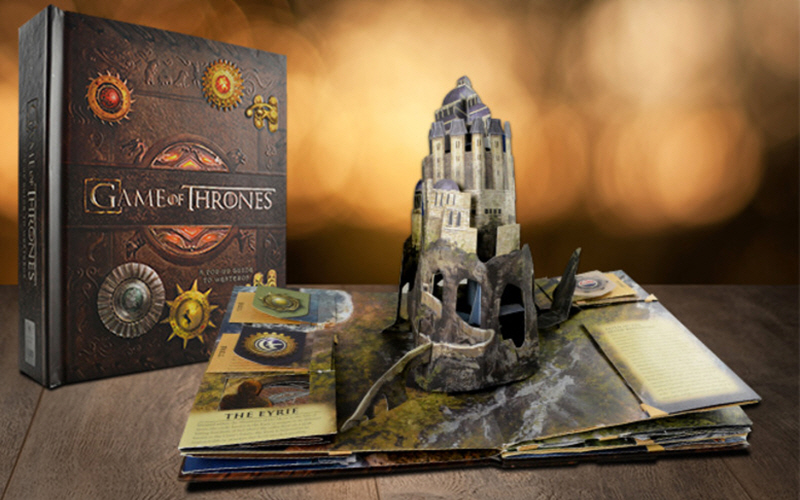 Hardcover books are for grown-ups and pop-up books are for children.  At least, that’s how things work most of the time.  Not with this beautiful hardcover, though, which features pop-up recreations of key locations from the HBO series (The Wall at the North, King’s Landing, and Winterfell, among others), along with various iconic elements of the show (dire wolves, dragons, and white walkers), all courtesy of renowned paper engineer, Matthew Reinhart.  More impressively, the book’s spine actually unhinges, so you can open up all the pages of the book into one huge canvas with every single one of the structures popped up at the same time.  Oh yeah, if you want to use the single pop-up as a table display, be forewarned – you will need a huge table for the job. 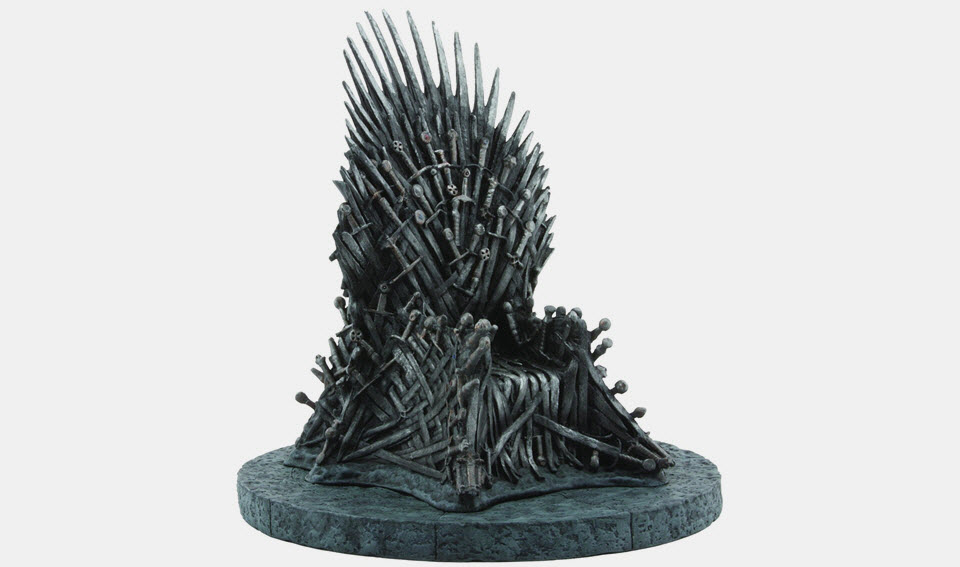 Measuring just 7 inches, you can’t exactly sit in this Iron Throne Replica to stake your claim as the ruler of all the realm.   You can, however, use the throne to crown any of your favorite articulated action figures as King of the Andals and the First Men.  Sculpted by Gentle Giant Studios, it comes with intricate detailing that honors the grandeur of the most sought-after seat in the land, with a beautiful paint job that brings the miniature replica to life.   Perfect for displaying as a centerpiece, along with the rest of your favorite Games of Thrones memorabilia.

A perfect gift for new Games of Thrones fans, give them this drinking vessel as they watch the first season of the show, believing, much like everybody did, that the entire thing revolves around Ned Stark and his happy-looking clan up North.  Just don’t be mad if they end up breaking the mug after watching the Stark patriarch get beheaded a mere few episodes in or his family line slowly picked apart throughout the cruel course of the series.   Oh yeah, the finish is glossy, rather than matte, like it appears on the picture – just so you know. 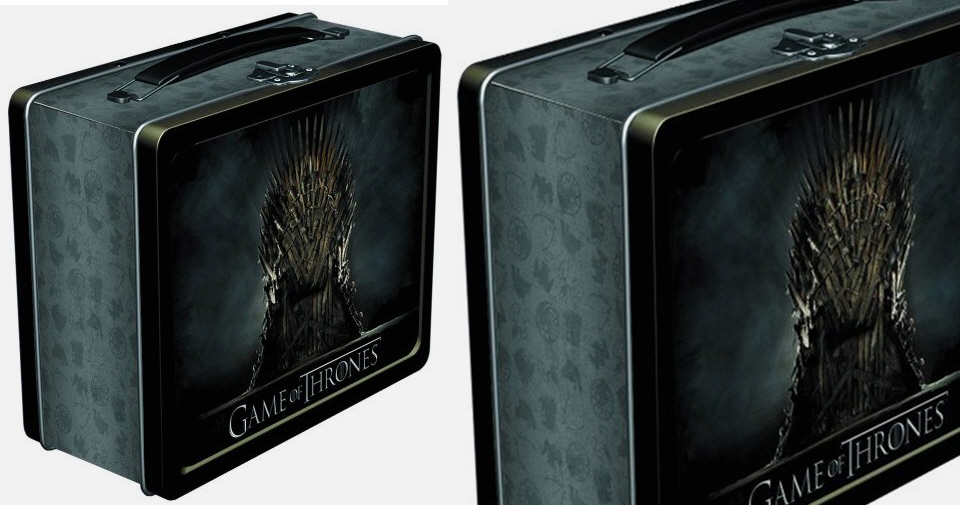 Eat like a king from this lunchbox, which features an embossed image of the iconic throne up front and a close up shot of the swords comprising the throne in the back.  The sides come printed with sigils of the various prominent houses in Westeros.  Granted, we don’t know how many people above the age of 12 will actually carry lunchboxes like this to their work or school, but a true diehard will definitely find use for it all the same.   Measuring 8.5 x 6.5 inches, it’s constructed from heavy-gauge tin with a reinforced metal clasp.

This officially-licensed set of glassware for your favorite libations feature the respective sigil and motto of each of the four houses, respectively printed on each 1-oz. shot glass.  Whether you identify with House Stark (because you’re brave and righteous), House Targaryen (because you like dragons), House Lannister (because your family is just as dysfunctional), or House Baratheon (because you were also cuckolded by your wife), this set lets you down drinks with your favorite factions out in Westeros. 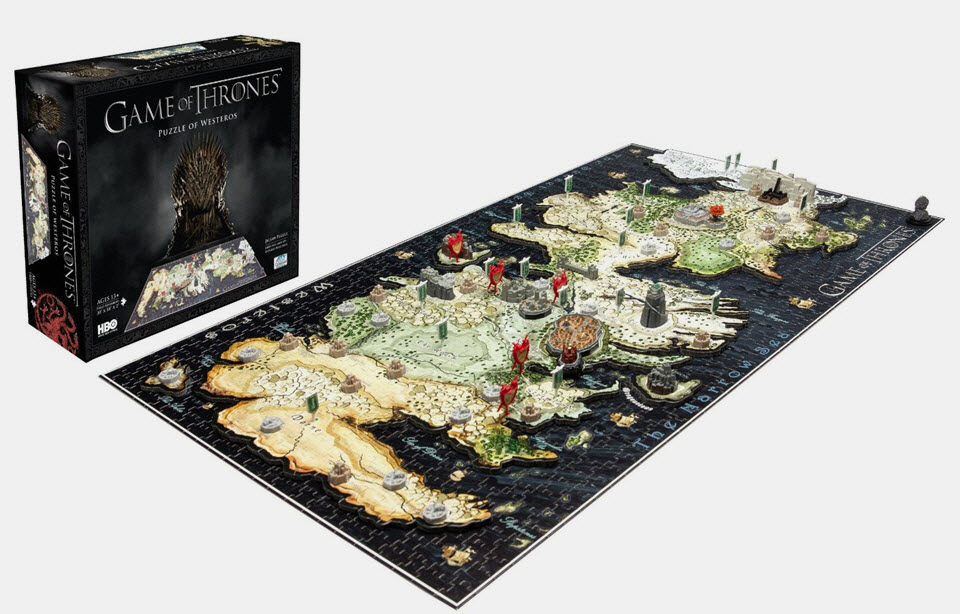 Yes, 4D Cityscape created a tabletop version of Westeros using their patented multi-layer puzzle designs and it’s an absolute treat.  Like their other puzzles, it comes in three layers: the first being a 1,000 piece puzzle that sets up the base of the map, complete with labels for the locations and regions of Westeros; the second layer is a 200-piece puzzle that adds the current landscape in the continent; and the third consists of miniature replicas of the structures found across the Seven Kingdoms.  The entire set contains 1,400 pieces. 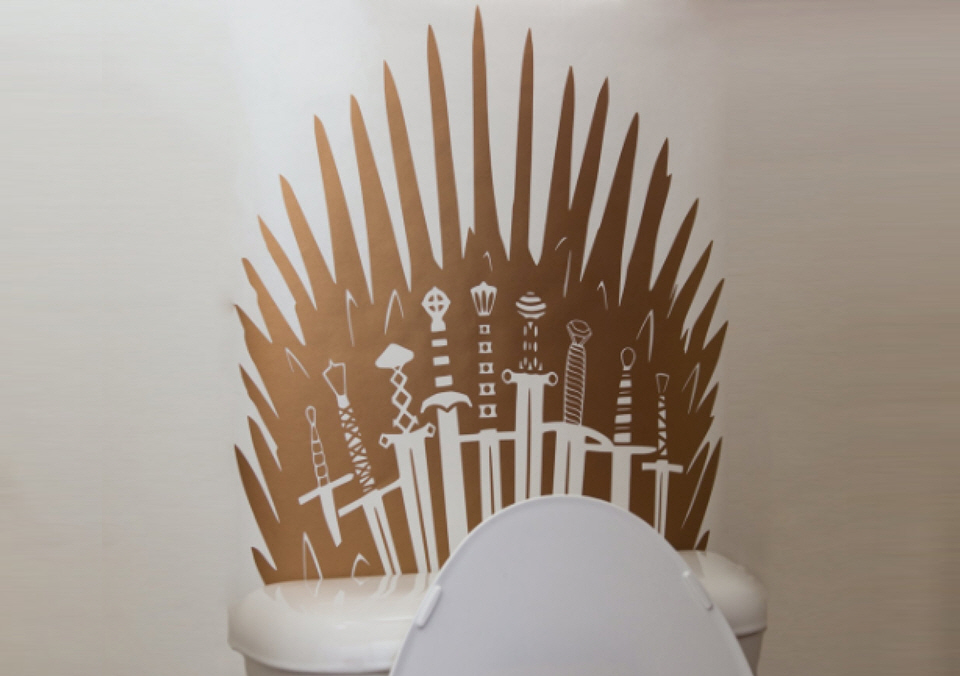 A $30,000 life-size Iron Throne is probably well beyond what you’d ever think about giving to friends and family for Christmas.  Heck, unless you’re rolling in money, that shouldn’t even be a consideration. This metallic toilet decal, on the other hand, should be well within your gift-giving means, letting your recipients turn the wall behind the bathroom throne into an assembly of swords hammered and sewn together over 59 days.  Sure, it’s not quite as stunning a replica as the life-size throne, but it sure makes any fan’s bathroom a whole lot more fun.

The Stark siblings may be orphaned, dwindled, and scattered across the Seven Kingdoms, but supporters of House Stark remain hopeful that the future will turn out fine for the remaining members of the brood.  Brandish your optimism for the siblings with this cotton canvas tote, which lists the names of the Stark children in beautiful typography – even beloved bastard, Jon.

If the Game of Thrones fan you’re buying a gift for is a little closer to your heart than a $20 novelty item might signal, maybe you can class it up with this set of nine carved crayons that feature the sigils of House Targaryen, House Tyrell, House Arryn, House Martell, House Baratheon, House Stark, House Lannister, House Tully, and House Greyjoy.  Each one is hand-carved from regular Crayolas by artist Hoang Tran.  Make sure you don’t give this one to kids, though, since they’ll likely just put it to paper (or worse, the wall) as soon as they see these are actual crayons they can draw with. 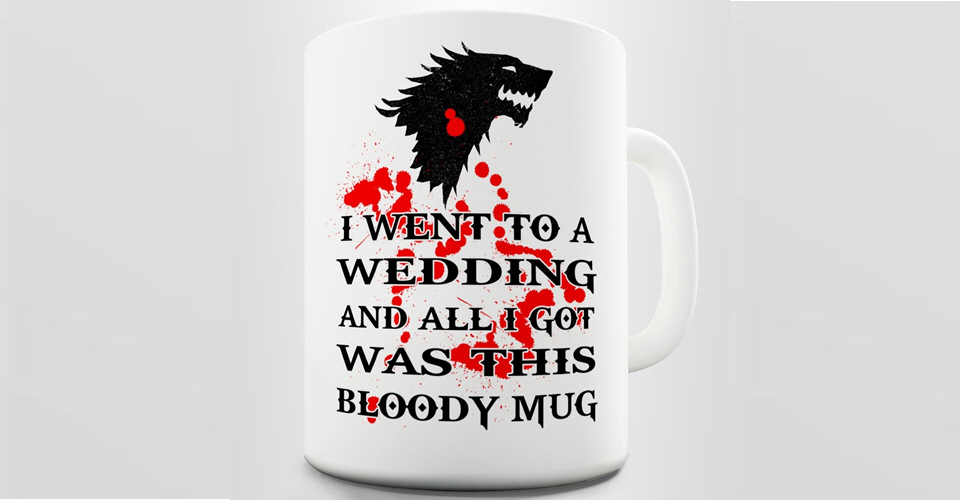 This is the wedding souvenir they would have been given out at the Red Wedding if Lord Walder Frey actually had a sense of humor and if any of the guests had actually made it out of his castle alive.  Features a graphic print of the Stark sigil, with realistic-looking blood spatters that came straight out of Robb Stark’s slit throat.  At least, we can pretend they did. 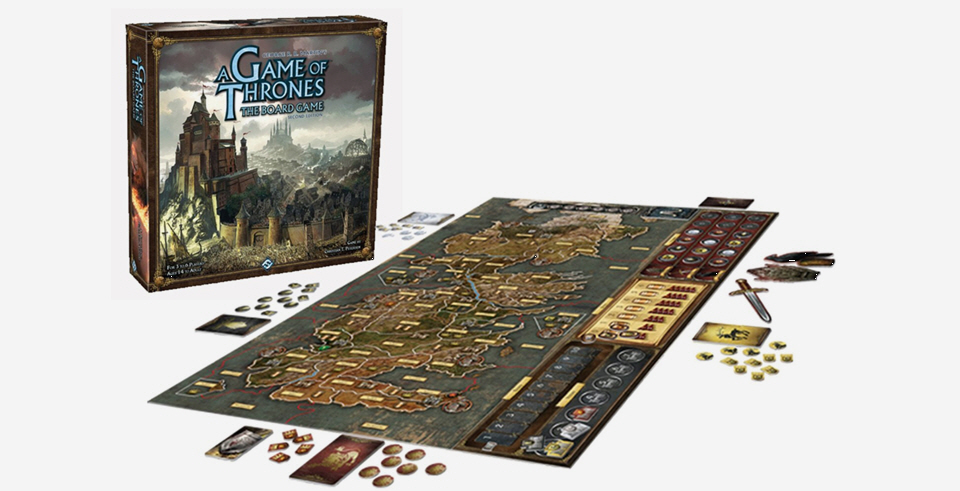 For the real Game of Thrones geeks in your life, forget the novelty stuff and just get them the board game to obsessively roleplay on.  Designed for three to six players, the game assigns each player the role of one character vying for the throne, giving them the chance to use their abilities in warfare, diplomacy, and intrigue to gain control of the realm.   In case the recipient already has the game, you may want to consider the expansions, “A Feast for Crows” and “A Dance with Dragons,” both of which are designed to work with the game. 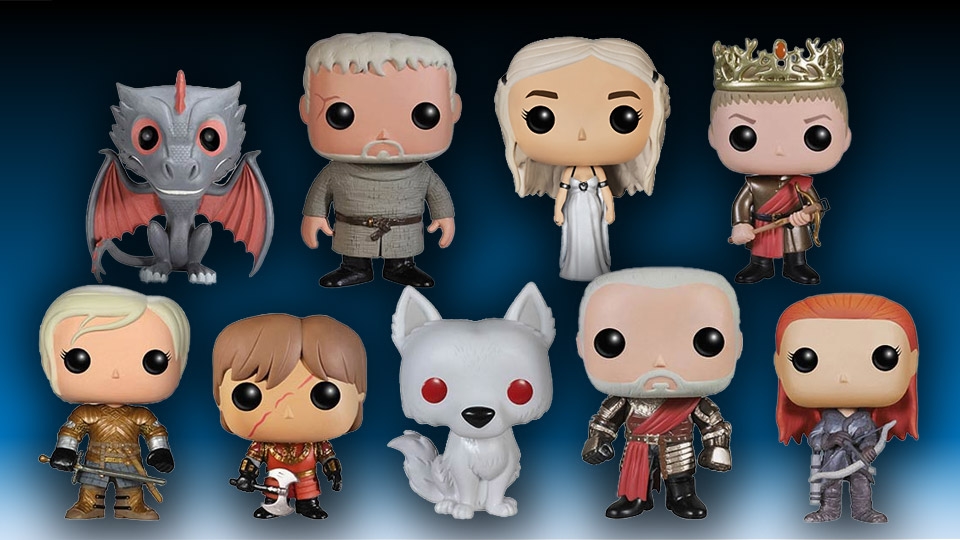 Know who a recipient’s favorite character from the show is?  Then, look them up in Funko Pop’s large inventory of Game of Thrones vinyl figures, nab them for wrapping up, and you’re all set.  Seriously, they got a good load of the players, from the main characters (Starks, Lannisters, Khaleesi) to some of the minor ones (Brienne, Khaleesi’s advisors) to the dragons to White Walkers to the ghost wolf.   Heck, they even got a headless Ned Stark, if you’re feeling a little morbid.