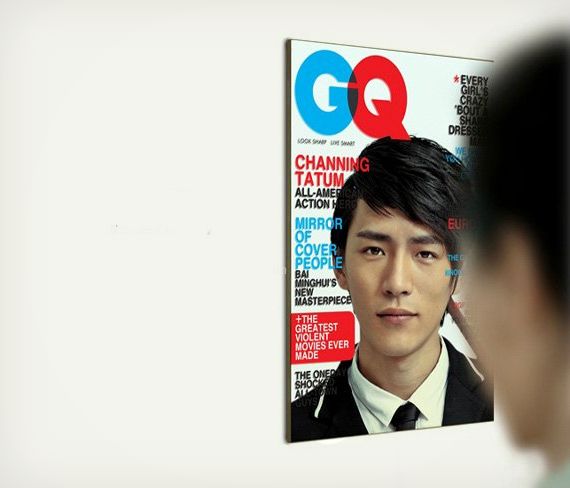 You know you’re somewhat good looking.  But you also know that you have nowhere near the handsome shapes God bestowed upon male models and moviestars.  But when you’re up in your room all by yourself, you like to pretend you are.  I know I do. Make that fantasy even more real with this GQ Magazine Cover Mirror, which shows exactly how you’ll look when fronting in an issue of the penultimate men’s magazine.

A magazine-sized wall mirror, it features the kind of headlines and typography that you’ll normally find in an issue of GQ.  That way, you can stand in front of the mirror first thing in the morning and see your mug plastered right on a GQ cover.

The GQ Magazine Cover Mirror isn’t made from usual mirrored glass.  Instead, they use a lighter and brighter reflective material that gives it the appearance of a glossy magazine cover unlike what you’ll get with a standard mirror.  It can be dirtied up and scratched, though, so you’ll have to clean and protect it like every other mirror in your house.

The only bad thing is the prints on the mirror can’t be replaced (imagine if this was stick-on acetate or something that you can just replace over and over), so you’re basically posing for the exact same cover every single time.  Still, it’s better than having another plain vanilla mirror in your house, though.

Amazon has the GQ Magazine Cover Mirror available now, priced at $39.99.  They have a bunch of other novelty magazine cover mirrors there, as well, such as Playboy, Vogue and Time, so you have choices if you’re not quite into the whole GQ thing (I’m an Esquire guy myself).