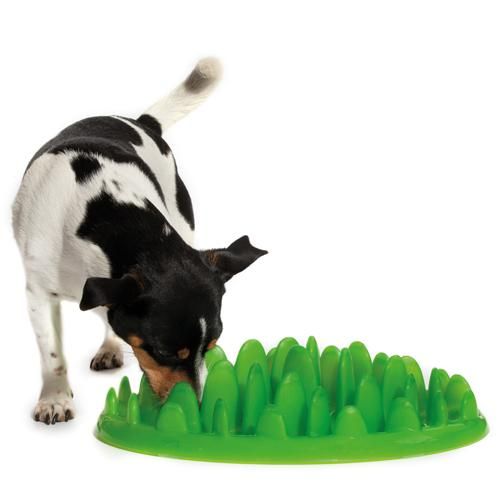 A lot of dogs eat voraciously to the point that it looks they’re inhaling food instead of eating it. And that can lead to problems, from choking to vomiting to serious cases of gas (yes, that was Rusty letting one go while you were chilling in the Dog House Sofa).  Since you can’t exactly tell your Labrador to calm down and eat at a more leisurely pace, you have to force them into it.  The Green Interactive Feeder does just that.

How?  Instead of putting the food inside a single open bowl, it spreads the food around a plastic labyrinth with plenty of raised dull spikes supposed to mimic wide blades of grass.  That way, the dog will need to hunt down the food in between the openings, forcing them to eat at a less-than-hurried pace. 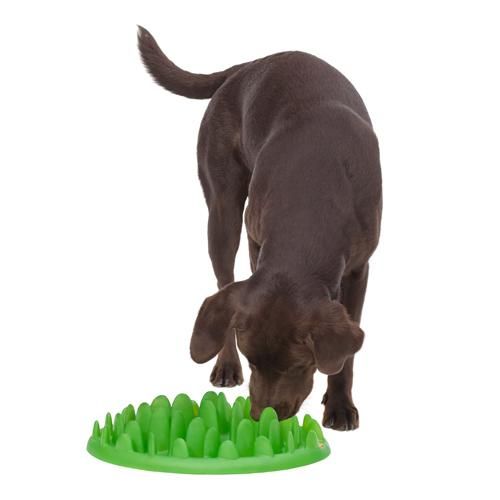 You know how dogs love to hunt (you can tell by the dead cockroaches around the house)?  The Green Interactive Feeder sort of makes them hunt for their food, turning eating into a game where they have to stick their tongues and snouts into various nooks and crannies before actually enjoying their grub.  That way, the dinner which usually lasts 15 seconds on their bowl can finally extend to a five minute meal (or 20 minutes if you have a really stupid mutt).

The device is made from hard plastic, making it dishwasher-friendly and plenty durable.  We can’t find details on size, but it looks big enough (from the pictures) for use with any dog, regardless of breed or appetite.  Hopefully, your dog doesn’t turn onto chewing those dull spikes once he gets frustrated, though.

The Green Interactive Feeder is available now, priced at $38.99.