Green Samba PWC Can Do 65mph On All-Electric Power

Transportation’s been heading green the last couple of years now. Silveira is about to take jet skis down the same path with the Green Samba, a next-generation personal watercraft (abbreviated as PWC, which is the technical name, by the way, since Jet Ski is a Kawasaki trademark) that eliminates toxic emissions by running on electric power, all while providing the same exciting performance of its gas-powered counterparts.

While it’s not the first attempt at an electric jet ski (yes, we’ll still use jet ski as a common noun cause we’re gangsta), the Ohio-based company believes it will be the first “viable” one. Powered by twin direct-drive propulsion pods and a battery system, it can run a top speed of 65 mph, matching the performance of the fastest 260bhp sit-down PWCs in the market today. According to Silveira, the efficiency comes courtesy of the special military technology used in the vehicle’s propulsion system. 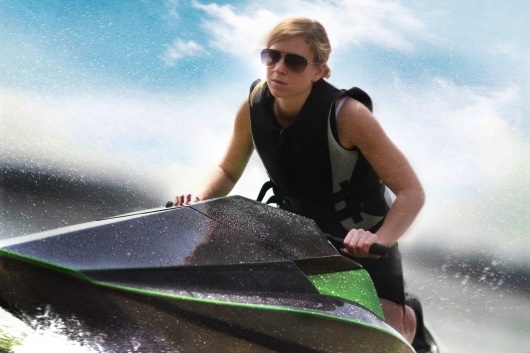 Like all electric vehicles, the Green Samba operates silently, which means you can’t hear it when one’s about to slice your head off in the ocean. Better start growing eyes in the back of your skull, brother. The battery should be good for up to three hours of speeding through the water, which really brings it close to conventional jet ski performance.

While there’s no final word yet, we’re hoping it uses Silveira’s impressive watercraft designs to go with the all-electric powertrain. We’re talking about the carbon fiber components, along with the lighter, smaller and lower profiles that make for greater maneuverability and more intuitive riding positions, as available in their gas-powered PWCs.

The Green Samba has been in the making for around five years now and the latest iteration sounds like its nearing a final prototype. Watch out for the unveil in August.