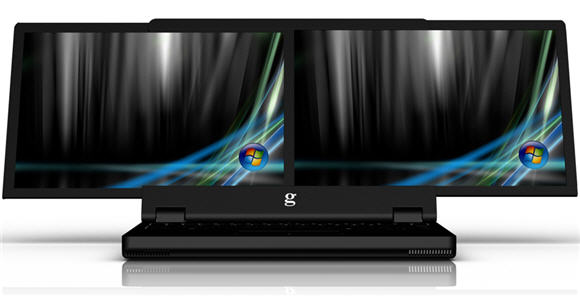 It’s not the first time a dual-screen laptop showed up, but the gScreen sure does it in a way no one else did.  Instead of adding a small secondary screen like previous efforts, the company’s gScreen Spacebook throws in two full displays on a single machine.

The prototype they’re currently showing around is a 15.4-inch model, sporting two full-sized LCDs.  In compact form, one screen hides behind the other, allowing you to use just one monitor if it’s all you need.  Slide them off and you’ll end up with two large panels, giving you over 30 inches of screen real estate.

In the guts, the unconventional Spacebook exterior gets a little more typical, touting what looks like standard laptop specs.  Details include a 2.26GHz Intel Core 2 Duo P8400, 4GB of RAM, 320GB of hard disk storage and a 512MB discrete graphics card (either a NVIDIA GeForce 9800M GT or a NVIDIA Quadro FX 1700M).  It will come with a DVD drive and the usual set of connectors, including USB ports, audio I/O, HDMI, VGA and PCI-E. 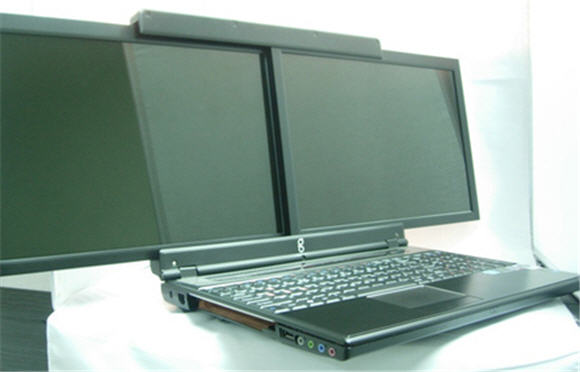 Love the idea of having two full-size displays on the road?  I’m sure you do…until you realize how much weight you’ll have to carry around.   The 15.4-inch Spacebook currently weighs a full 12 lbs (estimated), which is like carrying a freaking dumbbell in your laptop bag – you might as well do bicep curls, while you’re at it.

Ironically, the first gScreen Spacebooks going on sale in December will be 16- and 17-inch units, which should be even bigger and heavier than the current example.  There are also plans to roll out a 13-inch device, in case the initial production run proves successful.  Price is being estimated at under $3,000, though it’s not yet final.