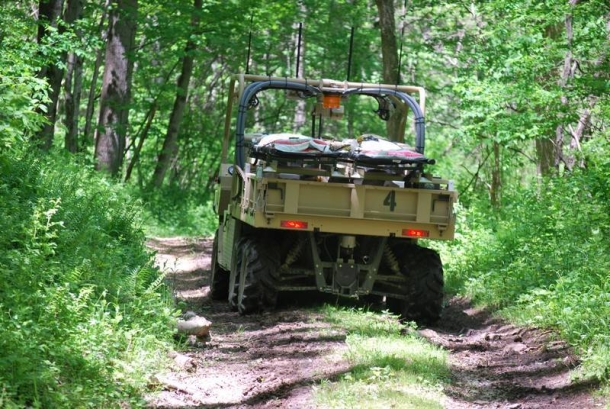 As a precursor to the robot takeover, drones have made themselves practically ubiquitous in the battle field.  You have drones doing reconnaissance, drones hurling themselves kamikaze-style at targets and, soon, drones trekking with you, carrying equipment and supplies.  That drone will be the Ground Unmanned Support Surrogate, otherwise known as GUSS, an off-road golf cart designed for short-range hauling needs.

By 2015, the US military wants 30% of all battlefield vehicles to be unmanned.  The “autonomous golf cart,” which will support troops traveling on foot, is hoping it can be a part of that.

As a beefed-up golf cart, GUSS can carry a haul of up to 1,800 lbs, all while moving at a pace of around 5 mph (it’s intended to keep up with soldiers’ walking pace).  Not only is it equipped to navigate over rough patches of terrain, it can do so in the day, night and inclement weather using an  array of onboard sensors and computer algorithms.   It can also be controlled remotely via a system called WaySight.

Developed by  engineering students from Virginia Tech, with help from TORC Technologies, they’re currently being tested by the Marine Corps Warfighting Laboratory.  We’re guessing the military’s not playing jungle golf with this thing as a cart, but you never know.  I heard strange things happen in them forests.

Four GUSS vehicles will reportedly be used in the upcoming Rim of the Pacific war games in Hawaii later this month, where you can expect more drones like these to get their feet wet in battle.  Drones that our future generation of robot overlords, like Summer Glau before her reprogramming (beyond Terminator, we all know that woman’s really a robot), will honor as their ancestors.