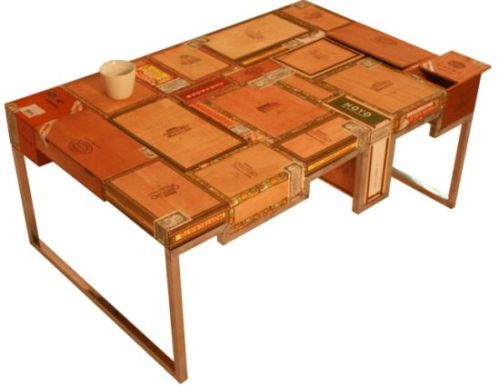 All cigar-puffing honchos deserve a coffee table that righteously proclaims their nasty habits with shameless conviction.  Now they can, with the Habana Coffee Table.

Crafted by furniture designer Pavel Perina, the slab was put together using recycled cigar boxes, each with their labels still in tow.   Some of the boxes, especially those along the edges, were kept functional with their hinges still intact.  That means you can actually use them to house your cigars, condoms, coffee supplies or whatever else you like to stash around the house.

On top and on the sides, the boxes were arranged so that all surfaces are level – pretty impressive, considering he used different sizes of boxes to put them together.  Turn the table over, though, and you’ll see the designer’s rendition of the Shanghai (China) cityscape, its towering buildings and structures represented using discarded cigar containers.

The slab is kept stable by a welded stainless steel frame that runs under it.  Personally, with all due respect, I think it’s an ugly slab.  While it is clear plenty of work was put into it, the result is an undeniable eyesore of a coffee table, especially with the irregular shapes produced by the bottom cityscape design.

The Habana Coffee Table is currently selling for $2,200.