Halo 3 HUD Desktop Puts The Action On Your Windows Background 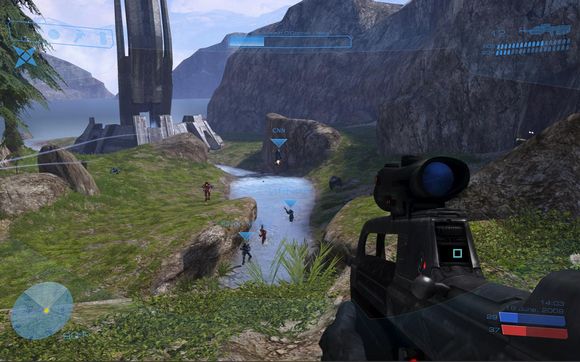 Here’s a simple criteria to slot into: likes Halo and uses Windows. If those two things are true for you, you may want to customize your PC background the same way Ryan Kennedy did, combining a Halo 3 screenshot with a bevy of stats and controls.

Looking nothing more than a grabbed screen from an online multiplayer session using the Valhalla map (complete with HUD indicators), it’s actually a functional Windows desktop, with the various objects either displaying information or providing a control. The radar, for instance, monitors your outside temperature, along with an image from Weather Underground. Displayed grenades are icons that launch specific programs while the Power Drainer opens a shutdown panel. Other elements on the screen are configured to display various information like network traffic (Ammo Clip), track playback (Health Bar), unread message count (Battle Rifle), system usage (Blue and Red points) and the battery life of your laptop (Ammo Count).

While this kind of rig may seem daunting to less-technically-inclined folks, Lifehacker (where the Halo 3 Hud Desktop was originally featured) assures that fashioning one of these beauties isn’t all too hard, even going so far as to give instructions on how people can build their own killer desktops. For this particular bundle, Ryan used a simple still from Halo 3, combined with personal customizations of the Windows-based Rainmeter application.

Of course, since I’m lazy, I’m just gonna write about it and hope he releases something that I can download and launch on my PC.  Take that SpiderMac!