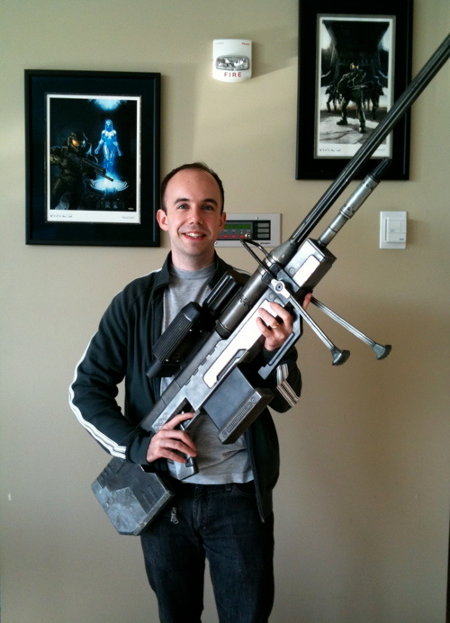 Way to go, geeks.  Cops reportedly swarmed the offices of Bungie Studios yesterday afternoon, after a concerned citizen phoned in the sighting of a man toting an AK-47.  When they got to the location of the erstwhile makers of Halo, it turned out to not be an AK-47 at all.  Instead, it was a large sniper rifle. A stupidly excessive and ridiculously large one, in fact – the kind you build as a life-size version of what the soldiers use in the game.

The suspect, as it turned out, is a deputy editor at Bungie, who was walking around carrying a replica of the sniper rifles used in the series by the UNSC forces.  It was originally built as a prop for the live action video shorts from several years ago and he was bringing it to the office for added flair as they played Halo: ODST.  Yes, it was a prop for geekery, nothing more.

While the caller may be branded as silly for phoning in a fake gun sighting, you really can’t blame the guy.   More than anything, the AK-47 report seems seriously conservative.  If I saw anyone walking around my neighborhood with a thing that big, I’ll be reloading my shotgun and preparing to defend my household too.  “Hello police, I think there’s an alien invasion going on.  Some dude with a big-ass giant gun that’s taller than him is walking around.  He looks ready to kill.”

Several police cars were said to have responded to the call.  Needless to say, they advised Bungie employees to be a little more discreet the next time they’re transporting the prop.  Seriously, you have to be nuts to think people weren’t going to be worried, right?