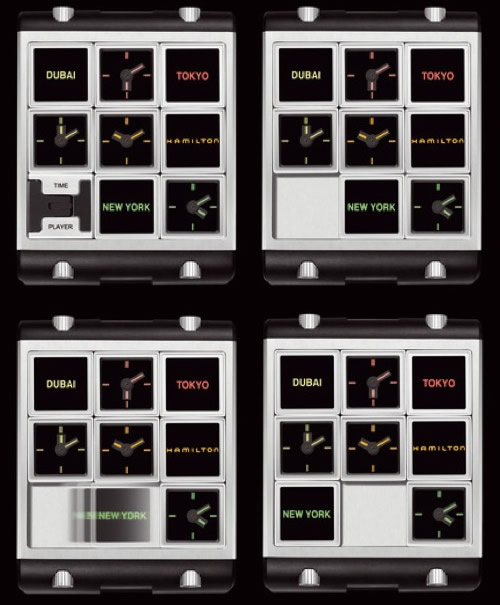 No matter the brand nor the model, watches pretty much do the same thing: they tell time. So please excuse if I refuse to buy another one. Oh wait, the Hamilton Time Player is designed like a sliding puzzle. Oooohh…I want one.

Based on a clock that Hamilton originally created for Stanley Kubrick’s 2001: A Space Odyssey, the watch features eight different displays tiled across a square surface. Just like an actual sliding puzzle, you can move each one around, allowing you to scramble everything and leave yourself confused. Which one’s the local time again?

The Time Player comes with a flat 48 x 42 mm titanium case that is split into nine squares. Eight of them come filled with movable tiles, with one block empty, so you can move the different panels around. Four of the squares come with actual analog watch dials (Quartz E 01.701 movement), three display the names of major world cities (Dubai, Tokyo and New York) and the last one just has the brand emblazoned right across it.

Like many watch releases, the informational brochure sounds like the meanderings of a deranged high school student: “Implementation of its unusual timekeeping concept unites finger-operated timekeeping in four up-to-the-minute time zones with zany design belonging to the future.” Yeah, whatever. In this case, the future happens to be 2001, which is actually the past. Duh.

Each tile is color-coded, so as long as you remember which one you set to the local time, you should be fine. Just in case you’re wondering, you’ll need to move each dial onto the center square to set the hours and minutes for it.  Set for availability in June, the Hamilton Time Player will retail for $2,700, which is too expensive even in the future.  Back in 2001.