Handysoap Gives You A Hand In The Bathroom 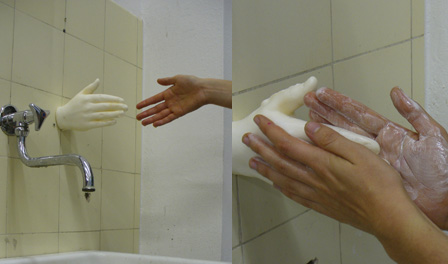 Really want to turn your bathroom into a horror freak show? Hook up that scary curtain, set up that zombie candle holder and install a Handysoap on the wall.

It’s soap, molded in the form of a hand that’s either about to shake your hand or pat your ass, depending on how you look at it. In the dark, it should look like one of those hands protruding out of walls the same way they used to do in 90s-era horror movies. ‘Memba those?

Handysoap appears to actually be just regular soap. Except, instead of a bar, it’s been formed into the shape of a wrist with a palm and five fingers. The placement in the photo, right above the sink, actually makes perfect sense. It sure is a quirkier alternative to having one of those liquid soap dispensers on there.

Created by 1000 & 1 Seife Seifenmanufaktur (nee 1000 & 1 Soap Factory), the hand is shown here at a demo installation set up by various interior designers for a show. We don’t think they have a horror theme going, but with the current fascination with vampires and werewolves, I wouldn’t be surprised.

We can’t find pricing nor ordering details, so you’ll have to add this to the “In The Future” column of your horror bathroom planning. Imagine how cool this will look once that soap starts getting used up – like a hand drenched in flesh-melting acid.  Yikes.