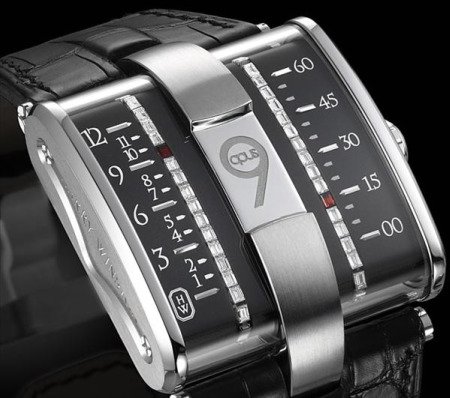 Most luxury watches tell time in conventional ways, separating themselves from the herd only by the level of exclusiveness they fit onto each device.  Leave all that funky, creative time-telling to the Tokyo Flashes of the world – luxury lines can live without it.  The opulent Harry Winston Opus 9, however, marries both and does so beautifully.

To tell time, it uses two parallel chains, each one made up of 33 baguette-cut diamonds (Harry Winston’s trademark shape) and a Mandarin garnet.  Numbers indicating hours are written on the left end with minutes displayed on the right.  Both chains move continuously, with the position of each garnet indicating the time.

The belts have been designed to maximize mobility without causing friction.  As such, the diamonds are guaranteed to retain their brilliance even after continued use.  The watch case comes in a squarish frame, measures 56 x 48 x 20 millimeters and is constructed out of 18 karat white gold.

Only 100 limited-edition Opus 9 watches will be sold, each one reportedly selling for $180,000.  The ninth timepiece in the line, it is the result of a collaboration from highly-regarded watchmaker Jean-Marc Wiederecht and high-fashion designer Eric Giroud.  Apart from the luxury styling and elegant design, the watch offers water-resistance for up to 30 meters and a power reserve of 72 hours.