Haul Your Own Professional Flash Accessory Kit For $88 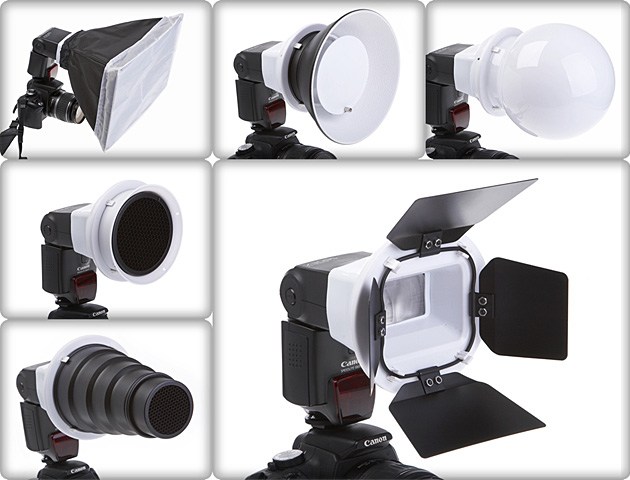 Want a complete set of flash accessories to work your photography skills with?  Check out this Professional Flash Accessory Kit from Brando, which includes pretty much everything you could want to stick into that barren Speedlite.

Most folks I know couldn’t be bothered investing in a set of flash equipment geared towards advanced photographers.   However, this professional kit is probably the most accessible around, retailing for less than half of what similar low-end set-ups are likely to net you.  It’s not the kind of rig casual camera users will probably need, but it wouldn’t be a bad set to pick up and learn some advanced skills with.

The outfit includes a soft diffuser with 6-color mask, a honey comb, a conical snoot, barndoor, a mini-reflector, a globe diffuser and your choice of one flash adapter.  You get seven options for the adapter, which you can pick out based on what kind of camera you want to use the set with.  Supported models include Nikon SB600, Nikon SB800, SONY F32X, Canon 430EX, SONY F56AM, Nikon SB26/27/28, Canon 580EX, Canon 550EX, Vivitar 285HV, Nikon SB900 and Canon 580EX II.

For anyone that’s even half-interested in doing better-than-default still captures, especially when indoors, this $88 Professional Flash Accessory Kit is probably the biggest set you can put together without shelling out a significant amount of money.  Of course, like everything else imported from China at this price, this is likely best as a temporary set-up before you can afford anything intended to last you for the long haul.