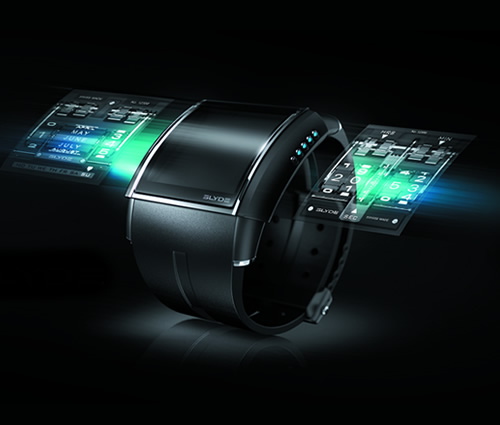 Tired of the same old watch face hanging on your arm day after day?  Instead of buying ten watches to get the variety you crave for, you might be able to pull it off with this: the HD3 Slyde.

Designed by Jorg Hysek, the original idea was to build a watch with a screen that can modulate according to the time, as well as the user’s needs and wishes.  They ended up with a smartphone-like concept — a watch screen that lets you slide through a variety of time-telling interfaces the same way you flip through different homescreens on your Android handset.

The HD3 Slyde is a Swiss-made timepiece with a boxy square case and the usual set of watch features, like a sapphire glass cover and water resistance up to 50 meters.  Case comes in black, gray titanium or pink gold, with band options in leather, printed alligator or rubber.

A variety of watch interfaces will be pre-installed on the phone, allowing you to switch from one to the other with a simple swiping gesture.  More screens will also be available for download (just like apps), in case you’ve started to tire with the default stash.  According to HD3, the downloads will be entirely time-telling screens — no games, no fancy utilities and no other function beyond what you normally get in a timepiece.

We’re not sure about pricing or availability, but they’re debuting the HD3 Slyde at Baselworld 2011, which is set to go down during the last week of March.  Personally, I think it’s a great idea.  Hopefully, the price won’t be retardedly high — though, it will probably will be.