Heating Saucepan Can Generate Power For Charging Gadgets And Cellphones 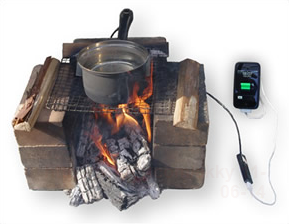 Usually, you choose your camping cookware based on what you can fit into your bags.   The Hitochaja HC-5 Saucepan offers a different reason: you can use it to charge your cellphone while you’re out in the wild.

And, no, it’s not a joke product or a design concept.  It’s a real  saucepan that generates power, giving you a whole new way to charge cellphones and other small gadgets while slumming it in the outdoors.

The Hitochaja HC-5 performs its little trick by turning excess heat produced by the fire while you cook into power.  Say, you’re boiling some drinking water and put the pan over fire.  Any heat beyond 212 degrees Fahrenheit (and burning wood can produce up to 900 degrees) goes essentially unused when boiling liquids, so the saucepan takes those for feeding into your gadgets’ batteries instead.

Maximum electricity output is 400 mA, which it will trickle via USB (five volt DC, 2 watts) into your drained mobile device.  According to the product page, you can fully charge an iPhone this way in just 3 to 5 hours (assuming you have enough wood to burn and water to boil, of course).

While it may sound a bit of a hassle keeping the pot cooking over the Survival Stove for extended periods, the process isn’t really all that different from the equally slow charging you can get out of portable solar generators.  Plus, the fact that you don’t depend on the sun shining means you can charge your cellphone any time you need to.  The Hitochaja HC-5 Saucepan is now available in Japan, priced at ¥23,000 ($278).