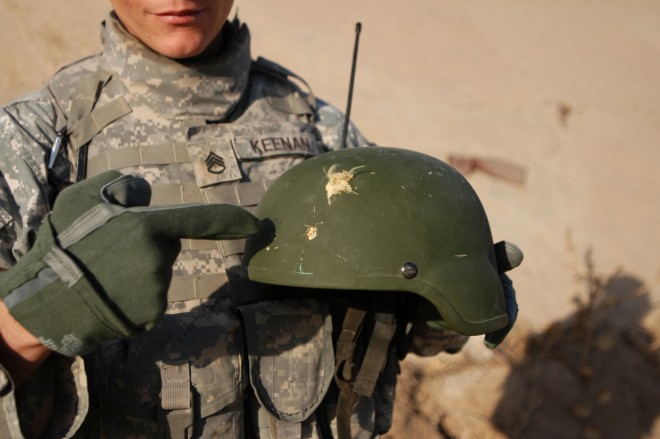 Curious you’re being stalked?  A military technology currently under development should help you find out for sure.  Called the Helmet Mounted Radar System (HMRS), the device is designed to help soldiers recognize threats within their immediate vicinity.

Able to detect moving targets with a full 360 degrees field of view, the radar can catch potential enemies  at distances of up to 80 feet.  Of course, the Moving Target Indicator (MTI) will turn up everything that moves, so soldiers will probably end up being freaked out by benign woodland creatures.  Sounds like a fun accident waiting to happen.

The HMRS uses an Advanced Combat Helmet with the necessary sensors and electronics all fitted into it (both mounted and embedded).  It can see through fog, smoke, dust and pitch black environments, making it ideal for use in fields of battle.  The entire assembly will weigh around 2.5 lbs, which should be comfortable enough to wear on your head.

If you’re worried enough by cellphone radiation emissions, putting a powerful radar on your head will probably freak you out even worse.  At least, when soldiers begin suffering from brain tumors, we’ll all have something obvious to blame.

Sources say the project is not ambitious as it seems, given that similar, less powerful prototypes have been made in the past.  Regardless, don’t expect to see them in-field (or use them to sniff out your stalkers) within the next few years.