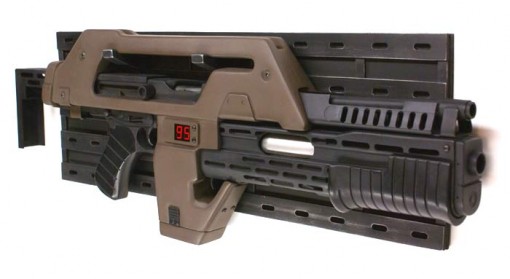 When you see a real alien landing in your backyard, what will be your first instinct?  Me, I’d probably pull out a gun and blast it to smithereens.  If that doesn’t work, I’d cock this thing in the extra-terrestrial’s face and hope it saw the movie.  Are you scared yet, inter-planetary visitor?

The M14A Pulse Rifle was the weapon of choice for the US Colonial Marines in James Cameron’s Aliens, splattering otherworldly guts like it was nobody’s business.  Unfortunately, this replica is only for show and doesn’t actually pack any firepower.  Still, if those “visitors” picked up the movie from somewhere in space, you might have a shot at actually scaring them a little.

Painstakingly fashioned after an original prop used in the film, the officially-licensed Hero Pulse Rifle replica is as accurate a recreation as you can get.  Sporting the exact same dimensions as the weapon in the silver screen classic, it fits in a large aluminum shroud, retractable shoulder stock, a metal barrel vent, removable magazine and a movable pump handle for launching grenades.  There’s even a LED display that shows the ammo count, although it always shows 95 (since the thing doesn’t fire).

Scheduled for shipment in the fourth quarter of the year, the authentic-looking Aliens Hero Pulse Rifle is available on pre-order for $899.95.  Even at that price, it’s apparently not a real gun and won’t help you thwart acid-spitting monsters when they try to destroy your house.  Hell, it doesn’t even fire pellets, which is sort of deflating, considering how much they’re expecting fans to shell out for it.

Still, if you’re looking for Aliens memorabilia, I doubt you can find anything as near-authentic (though non-functional) as this thing, which will be limited to a run of 250 units.