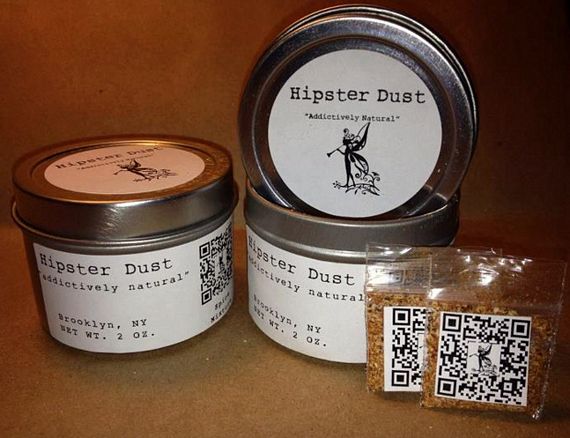 Sure, your cooking’s good, but is it hipster good?  Give your dishes the post-modern irony they deserve with the Hipster Dust, a works-on-everything spice mixture that gives food the unmistakable flavor of pretentious wankery.

We kid, we kid.  We’re not sure about the name, but this seasoning mix claims to add a distinctly delicious flavor to everything you can whip up in the kitchen.  And, no, we don’t mean microwaved frozen chicken fingers — we mean that stuff you actually make on woks and pots when you’re feeling positive and vibrant about being a part of the universe.

Hipster Dust is a spice mixture invented in the streets of Williamsburg, Brooklyn, where it has found an audience among both residents and establishments in the area.  Since magical dust deserves to be spread far and wide, they’ve decided to sell the concoction to everyone else in the world, giving lames, olds and mere mortals a chance to partake in the erstwhile little known food flavoring.

They don’t exactly describe what it tastes like from the website, so we guess you’ll need to let your imagination loose.  The few recipes posted on the site have quite the variety (e.g. grilled corn, oven fries, tuna steak, udon noodles), though, so we’re guessing this has a bit of a neutral taste that can go well with a whole host of dishes.

Will you be speaking in hipster tongues after using this in food?  Actually, that will make it more fun, but we doubt it.  At only $5 per 2-oz. tin can, though, the Hipster Dust is definitely worth the try, especially if you’re looking for a power-up in your kitchen game.