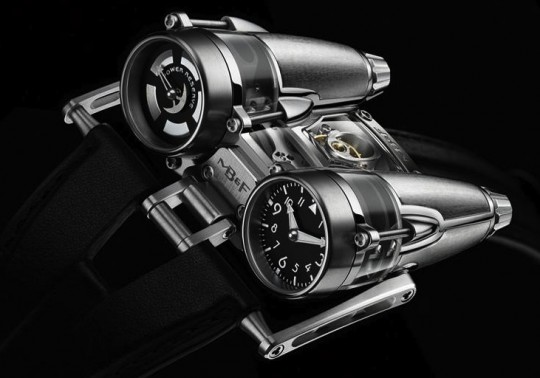 Let’s get it out of the way.  The HM4 Thunderbolt is not a watch, it’s a “horological machine.”  Which just happens to be a fancy name for a watch.  A really, really elaborate watch.

Created by high-end purveyors of wrist candy, MB&F, it’s claimed to be the result of three intense years of development.  While that would sound too much for an ordinary watch, this  stunning timepiece is certainly anything but ordinary.

The HM4 Thunderbolt sports a 54 x 52 x 24 mm aviation-inspired case that looks like the unholy union of miniature jet turbines and some weird steampunk aesthetic.  With a mechanism consisting of 50 jewels and 311 individual components, I’m almost ready to forgive them for calling the internals an “engine.”  But I won’t, because that’s just silly.  The case is made from grade 5 titanium, with see-through sapphire glass sections that let you see all the mechanical wizardry that happens within.

It has its own kinetic charger, which stores up to 72 hours of standby power on the two mainspring barrels.  There are two dials along the side: one for the actual time and another showing how much power remains.   Strap is a hand-stitched calfskin creation (black), with a titanium and white gold buckle.

MB&F claims that  over 100 hours of machining and polishing went into the transparent sapphire parts alone.  I can’t even imagine the rest.  Suffice to say, the HM4 Thunderbolt is easily one of the most elaborate watches you’re ever going to have a chance to adorn your arm with.  Did I say you?  I meant, whoever can afford to pay $158,000 for a wristwatch.