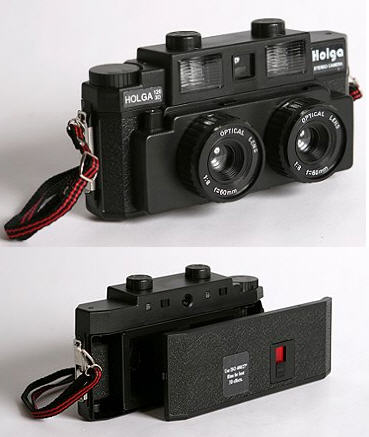 Played with Viewmaster as a kid?  If you’ve ever fancied making your own 3D slides (like I did) but couldn’t figure out how to, the Holga 120-3D Stereo Camera will gladly fulfill your wishes, all while looking like the most badass snapper this side of the Ghetto Blaster.  Sporting stereo dual lenses and a pinhole-based body, it certainly sets itself apart from your average Lomo-style plastic snappers.

The 3D tag may be a little confusing to some since 3D photography isn’t really something we get to treat ourselves with on a daily basis.  Basically, the Holga Stereo Camera shoots two dreamy, whimsical images at a time into a 120mm slide film that you can then watch with the Viewmaster-style 3D Stereo Slide Viewer (separate purchase).  It will look three-dimensional when seen from the Viewer’s specs, but you can’t exactly bring them to a shop for decking as a 3D print.  In fact, processing the film will likely just get you the two images side-by-side on a single frame.

Still, being able to make my own Viewmaster picture stories in 3D?  Where was this thing 20 years ago when I ended up having to satiate my creative desires by drawing 2D pictures on a round cardboard instead?  Features include threaded shutter release, single mask, standard tripod mount, bulb setting and built-in color flash with a rotating color filter wheel.  Pimping insane-looking double lenses, it measures a handy 7.5 x 3 x 3.5 inches and packs a whole lot of character.

Urban Outfitters is selling the Holga 120-3D Stereo Camera for $120.  You’ll, of course, need a viewer to watch the slides, which I suppose can work with a Viewmaster (not sure) if you still have one.   Otherwise, you can fork another $20 for the Holga 3D Stereo Slide Viewer plus another $5 for each set of six slide mounts.