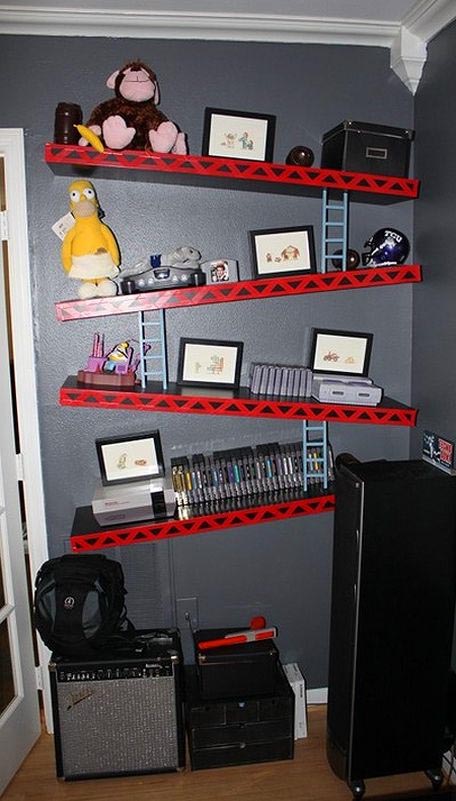 Oh, you thought your shelves were cool?  Well, it’s not Donkey Kong cool!

While it may not foster the best construction and design, these homemade Donkey Kong Shelves get it right anyway.  Mounted in tilting angles the same way they were set up in the game, they’re unmistakably lifted straight out of the classic platformer.

A perfect set of Donkey Kong Shelves would have been made of steel.  Since no one seems to be selling that, the imaginative (but, obviously, not-so-talented) DIYer fashioned the outfit directly from regular board shelves, painting it with alternating triangles to mimic the platform beams in the game.  Ladders were even added to further punctuate the effect.

To create the Donkey Kong aesthetic, the shelves were hoisted in uneven mounts, which should have been disastrous as shelving fixtures.  Somehow, someway, the dedicated fan seems to have managed to keep whatever stuff he puts on the planks from falling over like magic.  Do note that no expensive item seems to be set on top of the shelf, which should give you a clue how secure it is (note: not so much).

The Donkey Kong Shelves made number two on a list of ten awesome gaming furniture from Level One Boss (link below).   It should have been number one, but not having Donkey Kong, Princess and Jumpman on the platforms probably ruined its chances.  While there’s a monkey on the top shelf, it’s just some generic ape.  I’ll bet it would have grabbed the top spot if he just put a creepy primate in there, like Monchichi or something.  Just sayin’.

[Klausterbee via Level One Boss]