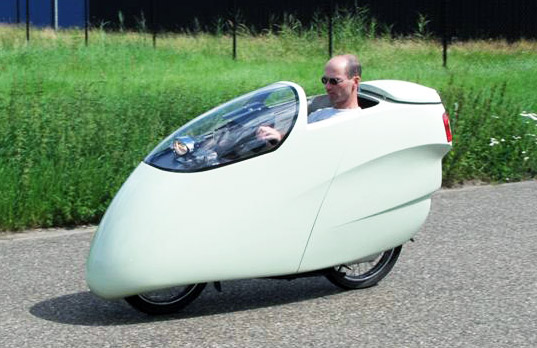 If you’re looking for a cheap motorcycle for daily commutes, the Honda Innova sure sounds like a nifty pick – it weighs a light 231 pounds, sports an efficient 9hp 125cc engine and posts a fuel mileage of over 100 mpg.  That’s apparently not enough for Dutchman Allert Jacobs, though, who further modded the bike to deliver a whopping 214 mpg at 55 mph.

An avid longtime recumbent bicycle and velomobile designer, Allert is familiar with the effect of aerodynamics on how much fuel you burn driving.   For the mod, he decided to apply the same principles he used in his previous projects to bring the Innova’s fuel efficiency to penny-pinching levels. 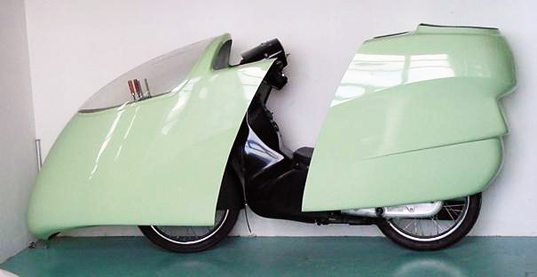 What kind of changes did the bike get to go from economically sound to ridiculously efficient?  According to Allert, he began by lowering the driving position and installing a recumbent seat, allowing the rider to operate the motorcycle in a feet-first stance.  To further reduce exposure to oncoming air,  he enclosed the front wheel and added another fairing to cover the rider. 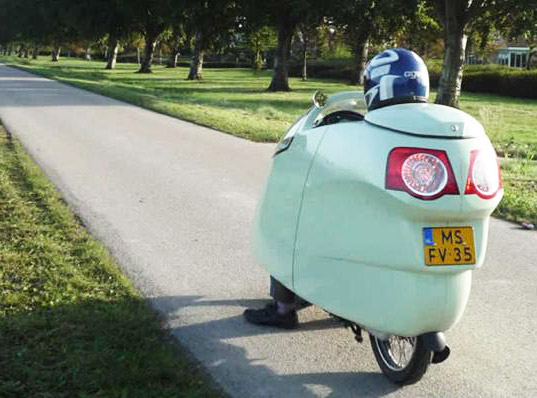 After those small changes alone increased top speed by 14mph, he went to work on optimizing gear ratios and reducing engine speed for improved mileage, which allowed the motorcycle to get up to 156 mpg.  When that was done, he proceeded to crank out the full bodywork, enclosing the Innova in a green, pod-like panel which can split in two (the front part moves forward) to let the driver in and out.

The resulting ultra-hypermiled Honda Innova now looks like a two-wheeled city car with downright amazing mileage – posting a top mark of 214 mpg on one 160 mile round trip.  He’s not even finished yet, as he continues to put work on the bike, further tuning it to reach a target of 235 mpg at 55 mph, which comes out to one liter of petrol for every 100 kilometers.  Insane.