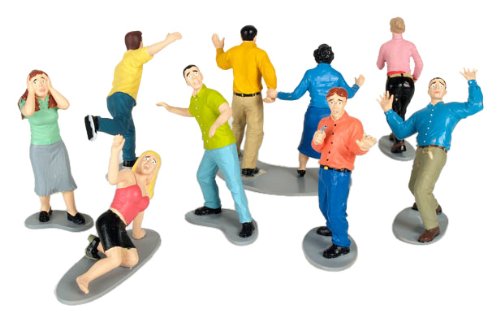 You’ve built your own miniature New York.  With zombie action figures.  All that’s missing are a bunch of scared citizens trying to run from the brain-eating undead to complete your own post-apocalyptic metropolis diorama.  The Horrified B-Movie Victims Playset is exactly what you need.

Comprised of plastic figures all styled like stereotypical bit players in movies (you know, the ones who die after a few seconds of screen time), this is the perfect set to include in any monster, murder or alien attack scene.   Whether for a miniature display, a horror-themed cake or your own serial killer roleplay, this sure beats green army men and other standard toy figures when it comes to spicing things up.

The Horrified B-Movie Victims Playset features eight vinyl plastic figures (there’s nine people in the picture since one figure is a couple), each one ranging in height from 2.5 to 3 inches.  The cast of characters look just like the ones in every campy movie you’ve ever seen — a shocked lady with dilated eyes, a busty blonde on the floor, a gun-wielding dude, a buttoned-up office square about to fall on his ass, and more.  The only obvious thing missing is a girl in a skimpy bikini, but we guess adding that makes it harder to sell the set as children’s toy.

You can get the Horrified B-Movie Victims Playset from Amazon, priced at $15.