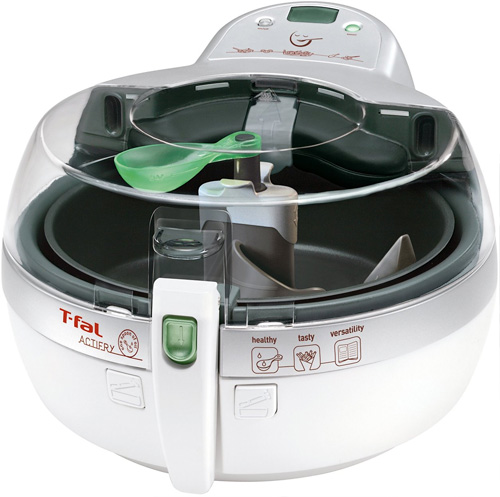 Seldom does cooking equipment float my boat.  When it can prepare 2lbs of crispy French Fries using just a spoonful of oil, however, I’d be silly not to take notice.  That’s exactly what the the T-fal ActiFry does, performing cooking feats it takes the local burger joint tubs of oil to accomplish.

How is that possible?  My money is on voodoo magic.  According to T-fal, though, it’s a lot less esoteric than that.   To accomplish the feat, the machine combines a pulse heating system and a unique stirring paddle, mixing things up to maximize the oil (a system the company claims they developed over ten years).  Of course, I’m not convinced – we all know there’s a high priest involved when magical things like that happen.  Regardless, that means a mere 3% fat content on your fries, as opposed to 18% from the traditional “dump it in a pot of boiling lard” way.

Despite its otherworldly frying powers, the T-fal ActiFry is unmistakable as a kitchen equipment the moment you lay eyes on it.  It’s hard to be sure what it does at first glance, but there’s no way you can mistake it for anything but electronic cookery.  It comes with its own dosing spoon, transparent steam-free lid, an assembly of dishwasher-safe removable parts and the ability to take over all of your home’s frying duties.

Since everything tastes better put through burning oil and served with a slather of catsup, your whole family should love this grease-cutting cooking apparatus.  It makes less-greasy grub, cooks faster than usual and leaves no excess oil for disposal.  Plus, the healthy angle eases my guilt about eating fried crap all week long.